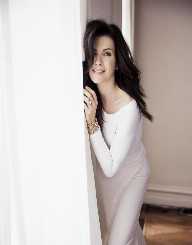 Julianna Luisa Margulies was born 8th June 1966. She was born in New York, to parents Paul and Francesca Margulies. Her father was an advertising executive on Madison Avenue but was also well known as a writer and philosopher. Her mother was a ballet dancer and movement teacher.

Julianna Margulies attended high school at High Mowing School in New Hampshire and went on to get her Bachelor of Arts from Sarah Lawrence College.

She is the youngest of three children, all girls. When Julianna Margulies was two years old, the family moved to France for two years, and then they moved to England, before returning to the United States. Her sister Alexandra also went into the acting profession.

Julianna Margulies was a waitress until she landed her first movie role. She made her screen debut in 1991. She acted in the Steven Seagal movie, Out for Justice.

In 1993 and 1994, Julianna Margulies played several small roles in television dramas, and then her break came when she filmed in the pilot of ER. She starred in the program for six years before deciding to leave and move on to other projects.

From 1997 to 2009, Julianna Margulies was kept busy. She was in 15 movies and played roles in over ten television series. In 2009, Margulies received another major break, when she was given the lead role in The Good Wife. Not only did Margulies star in the series, but from the third season onwards, she was also the producer.

Julianna Margulies has been in four more movies and several television shows between 2009 and 2018. When Margulies’ father died in 2014, she published a children’s book called Three Magic Balloons. The story was one that her father wrote for the three sisters as young children, and Margulies was very pleased to be able to honor her father’s memory by releasing the book for other young children to read.

Julianna Margulies starred in The Good Wife for 156 episodes over seven years, finishing the series in 2016. Her other major acting role, was in the television series ER, which she starred in for six years.

Julianna Margulies has been nominated for over 60 awards and is the only cast member of ER to have received an Emmy Award for the show.

She has won a Golden Globe Award, three Prime Time Emmy Awards, and eight Screen Actors Guild Awards, amongst others. Her awards were for both The Good Wife and ER.

In 2015, Julianna Margulies was honored with a star on the Hollywood Walk of Fame.

Julianna Margulies had a significant relationship from 1991 to 2003 when she was dating the actor Ron Eldard.

In 2007, she married Keith Lieberthal, an attorney. The couple has one child, a son name Kieran. The family lives in New York.

Julianna Margulies has always placed the utmost importance on family time, even to the point of almost turning down her role in The Good Wife because it was originally to be filmed too far from where she lived with her family.