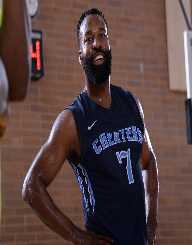 Baron Davis is an American basketball player who is best known his time with the Charlotte/New Orleans Hornets and his two NBA All-Star Game appearances.

Davis was born on 13 April 1979 in South Central, Los Angeles. He attended Crossroads High School, a private school in Santa Monica. His grandmother, Lela Nicholson, was Davis’ guardian as a child and encouraged him to apply himself to basketball. Davis enjoyed a highly successful senior year at Crossroads. He led the team to victory in the Beach Ball Classic tournament and was named as Gatorade Player of the Year. Davis also appeared in the McDonald’s All American game and won the Sprite Slam Dunk Contest in 1997. Davis’ success as a high school player meant he was highly sought after by some college basketball programmes.

Davis was courted by Georgia Tech and Duke University but chose to go to the University of California, Los Angeles so that he could remain near his family. In his freshman year with UCLA Bruins Davis tore his anterior cruciate ligament, but recovered and was able to return to play in his sophomore year. Despite his injury, Davis was named Pac-10 freshman of the year. Davis averaged 13.6 points and 5.1 assists a game during his college career. Davis’ performances were good enough for him to declare himself for the 1999 NBA draft after two years of college basketball.

Davis was drafted third overall in the 1999 NBA Draft by the Charlotte Hornets. Davis was largely a backup in his debut season with the Hornets, who reached the first round of the playoffs before being swept by the Philadelphia 76ers. Davis became a starter in his second season; he started all eighty-two regular season games. The Hornets again reached the playoffs. They swept the Miami Heat in the first round but were defeated by the Milwaukee Bucks 4-3 in the next round. Davis broke the record for the longest shot in the NBA during a game against the Bucks.

Davis netted from eighty-nine feet in the dying second of the third quarter. Davis’ third season was much like his second, he was an every game starter for the Hornets, and they again made the playoffs. They defeated the Orlando Magic in the first round only to again lose in the second round, this time to the New Jersey Nets. The next season things went badly for Davis. The franchise relocated from North Carolina and became the New Orleans Hornets. Davis suffered some injuries and could only play fifty regular season games. The Hornets did make the playoffs but were defeated by Allen Iverson and the Philadelphia 76ers.

Davis was again limited by injuries in the 2003/2004 season and only played sixty-seven games. The Hornets were again defeated in the first round of the playoffs, this time falling to Dwayne Wades’ Miami Heat by four games to three. The Hornets traded Davis for Speedy Claxton and Dale Davis of the Golden State Warriors. The Hornets would fail to make the next three playoffs and released Dale Davis shortly after he arrived.

Davis was delighted to be back in California. The Warriors and Davis enjoyed little in the way of success during his first two years with the franchise. In the 2006/2007 season, the Warriors pulled off a major upset in the playoffs. The Warriors become the first bottom seed team to defeat a number one seed in the history of the best of seven playoff series. They defeated the Dallas Mavericks 4-2 and Davis averaged 25 points a game during the series. It was the Warriors first appearance in the playoffs in thirteen years. The euphoria was short-lived though as the Warriors crashed out 4-1 in the next round to the Utah Jazz. The Warriors failed to reach the playoffs the following year, and rumors circulated that friction existed between Davis and the coach Don Nelson.

Davis chose to opt out of his contract and moved to the Los Angeles Clippers. Davis’ time with the Clippers was largely disappointing. The franchise did not have a successful history, and the addition of Davis did not stop the Clippers falling to a 19-63 record. Davis also suffered some injuries. Davis signed a five year deal with the Clippers, but his disputes with ownership and the coaching staff saw him traded after just three years in L.A. The Clippers traded Davis and a first-round pick for the Cleveland Cavaliers Mo Williams and Jamario Moon. The Cavaliers were in the doldrums having lost star player Lebron James and held the worst record in the league when Davis arrived.

Davis managed to raise the game of the Cavaliers and scored a memorable win over Lebron James and the Miami Heat. The Cavaliers would use the Clippers first round pick to draft Kyle Irving who they wished to play at Davis position. The Cavaliers waived Davis’ contract, and he signed with the New York Knicks. Serious injuries marked Davis' time with the Knicks. He began the season with a herniated disk, and in the playoffs, he collapsed on the court with a serious knee injury. Davis had torn both his medial and anterior cruciate ligaments.

Davis worked on rehabbing his knee and would not return to a basketball court for nearly three years. He played in the Drew League before signing with NBA Development League team the Delaware 87ers. Davis played 835 games in the NBA and had an average of 16.1 points, 7.2 assists and 1.8 steals per game. Davis holds the record for best steals per game average in the NBA playoffs with 2.3 per game.

Davis married Isabella Brewster in 2014, and the couple has two children together. Davis owns the 5 Balloons Interactive gaming company and Black Santa, a retail company. He is also a member of the Screen Actors Guild.