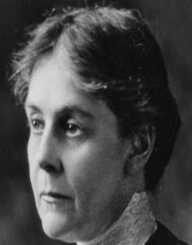 Alice Hamilton was born on February 27, 1869. She was an American physician and author. She was also a research scientist. She is famously known as a pioneer in the field of industrial toxicology. She became the first woman to be employed at Harvard University. Alice was also a humanitarian and peace activist. She died on September 22, 1970, at the age of one hundred one.

Alice Hamilton was born on February 27, 1869, in Manhattan in New York. She was born to Montgomery Hamilton and Gertrude Hamilton. She grew up alongside four siblings, Arthur, Edith, Norah, and Margaret. Alice grew up in an extended family in Fort Wayne in Indiana. Alice was homeschooled by her parents. She, however, completed her early education at Miss Porter’s Finishing School for young Ladies in Connecticut. After she returned to Indiana, she studied science with a high school teacher in Fort Wayne. She later studied anatomy at Fort Wayne College of Medicine for twelve months.

In 1892, she joined the University of Michigan Medical School. The next year she graduated from the school with a medical degree. She later finished her internships at the North Western Hospital for Women and Children, Minneapolis and the New England Hospital for Women and Children, Boston, Massachusetts. In 1895, she enrolled back at the University of Michigan to study bacteriology as a resident graduate. She was also a laboratory assistant of Frederick Novy.

In the fall of the same year, Alice Hamilton travelled with her sister Edith to Germany where she studied bacteriology and pathology at Universities in Leipzig and Munich. In 1896, she returned to the United States where she continued her post-graduate studies at Johns Hopkins University Medical School. At the school, she worked for hand in hand with Simon Flexner.

In 1897, Alice Hamilton became a professor of pathology at the Woman’s Medical School of North Western University.  After she moved to Chicago, she became a member and resident of the Hull House. At the house, she was Jane Addams (social reformer) physician. She also volunteered to teach art and English at the house. Alice stayed at the Hull House from 1897 to 1919.

However, after 1919 she continued going to the house until the death of Jane in 1935. In 1902, the Woman’s Medical School closed, and she became a bacteriologist with the Memorial Institute for Infectious Diseases. She later studied at the Pasteur Institute in France. Alice was later tasked with investigating a typhoid epidemic in Chicago. In 1908, she published a topic on the study of Industrial Medicine in the United States.

In 1910, Alice Hamilton became a medical investigator to the Illinois Commission on Occupational Diseases. Her investigation during that period of employment focused on industrial poisons. By the year 1916, she had become America’s leading authority on lead poisoning. Alice later pioneered occupational epidemiology and industrial hygiene. While still at the Hull House, she was an active women’s rights and peace activist.

In 1919, she became an assistant professor in the Department of Industrial Medicine at Harvard Medical School. She became the first woman to be appointed to any field in the university. She served as an assistant professor until 1935 when she retired. From 1924 to 1930, Alice served as a member of the League of Nations Health Committee. She was the only woman in the committee.

After retiring from Harvard in 1935, Alice Hamilton became a medical consultant to the United States Division of Labour Standards. She also remained an active writer in her retirement. She wrote books such as ‘Industrial Toxicology’, ‘Hitler Speaks: His Book Reveals the Man’, ‘A Woman of Ninety Looks at Her World’, ‘The Youth Who Are Hitler’s Strength’ and ‘Exploring the Dangerous Trades: The Autobiography of Alice Hamilton’ among others.

Alice Hamilton received honorary doctorates from the University of Michigan, Smith College and Mount Holyoke College. In 1935, she was awarded the Chi Omega Women’s Fraternity’s National Achievement Award. In 1947, she became the first woman to receive the Lasker Award. In 1973, she was posthumously inducted into the United States National Women’s Hall of Fame. In her life and after her death she achieved a lot.

Alice Hamilton never got married in her lifetime. She also did not have any children. She passed away on September 22, 1970, due to a stroke at her home in Connecticut. She died at the age of one hundred and one. Alice was buried at Cove Cemetery in Connecticut.