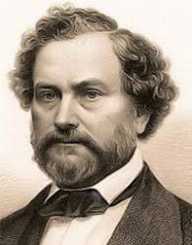 American inventor and businessman Samuel Colt was born on the 19 July 1814 in Hartford, Connecticut. He was the son of Christopher Colt and Sarah Caldwell.

At a young age, Samuel Colt began working for a farmer in Glastonbury. The work involved doing farm chores as well as schooling. Around this time, he had access to a scientific encyclopedia, the Compendium of Knowledge and reading about famous inventors fired his imagination.

As a young, Samuel Colt heard stories from soldiers about how it would be impossible for a gun to shoot more than one bullet. He subsequently became interested in proving the impossible. At 15, Colt was sent to sea to learn about the trade. Onboard, he became interested in the ship’s steering wheel and concluded that the rotating of the wheel could be used in the gun design.

Once home from sea, Samuel Colt presented his initial ideas to his father who funded the creation of two prototypes. Colt then traveled to England to obtain a patent for his resolver, and while there he studied the designs of Elisha Collier, who was famous for his revolving flintlock rifle. Upon his return to the United States, he set up his first manufacturing plant. His first revolver was the Colt Paterson, but business was complicated because of the economic crash of 1837.

Samuel Colt then worked with cables and underwater mines for a time before receiving an order from Captain Samuel Walker which enabled him to resume his gun-making business. Walker and Colt designed the Walker Colt revolver and obtained finance to set up a manufacturing plant, Colt Armory.

After Colt’s early death in 1862, his widow Elizabeth, who owned the controlling interest in the company, and her brother Richard Jarvis were heavily involved in the business. Elizabeth continued her stake in the company until selling her shares in 1901.

Samuel Colt's wife was Elizabeth Hart Jarvis, the daughter of an Episcopal minister, Reverand William Jarvis and his wife, Elizabeth. He met Jarvis in 1851, and they were married in 1856. They had four children, three of whom died young. Their fourth child, Caldwell Hart Colt, was an inventor and keen yachtsman who drowned on the 21 January 1984 when his yacht, The Dauntless, went down off the coast of Florida.

Samuel Colt died of complications from gout on the 10 January 1862 in Hartford, Connecticut. He was 47 years of age.

Colt’s widow Elizabeth Jarvis had an Episcopal church designed as a memorial to her husband and their deceased children. Edward Tuckerman Potter designed the building which contains guns sculpted into the marble. Jarvis also built a parish house to commemorate their son Caldwell who died in 1894.