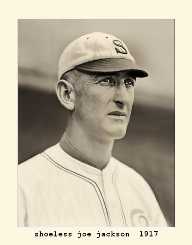 Joseph Jefferson Jackson was born on July 16, 1887. He was an American Baseball player. He played for numerous Major League Baseball (MLB) Teams. He was known by the nickname ‘Shoeless Joe.’ His career went through the mad when he was allegedly tied to the Black Sox Scandal. He was a left fielder in the baseball pitch. He died on December 5, 1951, at the age of sixty four.

He worked so hard to provide for himself and his family. He developed an interest in baseball from a young age. He later started playing for the Brandon Mill’s Baseball Team. He was paid $2.50 to play on the weekends. He received a baseball bat as a gift and named it Black Betsy. By the year 1905, he had become a semi-professional in baseball. He travelled from town to town playing for different teams.

In 1908, Shoeless Joe Jackson became a baseball player with the Greenville Spinners, and that is how he started his professional career. He also signed a contract to become a member of the Philadelphia Athletics’ Squad for Major League Baseball with Connie Mack. In the 1908-09 season, he played ten professional games. In 1910, he was traded to the Cleveland Naps where he recorded a .408 batting average. In 1912, he scored the first run at the Tiger Stadium.

In 1913, he led the league with 197 hits. In 1915, he was traded to the Chicago White Sox where he was also successful. When World War I started, he missed the 1918 season since he was working in a shipyard. In 1919, he went back to the field and recorded a .351 average in the regular season and a .375 average in the World Series. In the next season, he batted an average of .382, but his team was still defeated by the Cincinnati Reds.

After the defeat, Shoeless Joe Jackson and seven other players were caught up in the Black Sox Scandal when they were accused of match-fixing at the 1919 World Series that they played against Cincinnati Reds. They were charged with having accepted five thousand dollars each to lose the match. In 1920, the matter was left in the hands of a grand jury.

In 1921, the jury found them not guilty, and they were acquitted. But the players were completely banned from ever playing baseball by the Commissioner of Baseball Kenesaw Mountain Landis. Jackson, however, played and coached baseball in the minor leagues mostly in Georgia and South Carolina. He later started a dry cleaning business with his wife in Savannah, Georgia.

In 1908, Shoeless Joe Jackson married Katherine Wynn until his death. He died on December 5, 1951, of a heart attack at his home in Greenville. He died at the age of sixty four. His remains were buried at Woodlawn Memorial Park in Greenville.