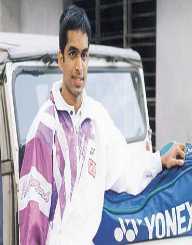 Pullela Gopichand was born on November 16, 1973, in Nalgonda, Andhra Pradesh, India. His parents were Subbaravamma and Pullela Subash Chandra.

Even as a child, Pullela Gopichand was in love with sports. He loved to play many sports, but he especially loved badminton. At this time, he was only playing sports for fun, instead of for any sort of reward or competition. As a teenager, he attended St. Paul’s High School. It was also around this time that he started to compete in badminton competitions.

After high school, Gopichand attended A.V. College. Pullela Gopichand earned a degree in public administration. In 1990, he also began to play on the Indian combined universities badminton team. He continued to play on this team throughout 1990 and into the early part of 1991. At the same time, he was also trying to further his education by taking engineering classes. However, he failed these classes and dropped out of college.

After leaving college, Pullela Gopichand decided to focus on badminton. He moved so he could practice at the Prakash Padukone, which was one of the best places for a badminton player to receive training in India in the 1990’s. Here, he was trained mostly by his mentor, Prakash Padukone.

Sadly, in 1994, Pullela Gopichand suffered a serious injury that almost forced him to quit badminton forever. Luckily, with surgery and the therapeutic power of yoga, Gopichand slowly healed and his health and dexterity returned. By 1996, he was ready to compete again. It was in this time year that he entered and won the National Badminton Championship.

In 1997, Pullela Gopichand began playing for Germany. At the same time, he also played several games for Indian teams. He continued to play for Germany until 1999.

His success continued throughout the 2000’s, with the peak of his career being in 2001. It was in this year that he won the All England Open Badminton Championships. While competing in this competition, he beat several of the world’s best badminton champions. He was the first Indian to win the contest in thirty years, with the last Indian to win being his mentor. After this victory, Pullela Gopichand worked on retiring. Even though he was young, his injuries were too many for him to continue playing badminton for the rest of his life.

All of Gopichand's awards and accomplishments are due to his feats in badminton. Some of his most prestigious awards are listed below.

Pullela Gopichand married P.V.V. Lakshmi, who is also a badminton player, in 2002. Together, they have two children: Gayathri and Vishnu. Gayathri also plays badminton in youth competitions, and Vishnu is training with his father at the Gopichand Badminton Academy.