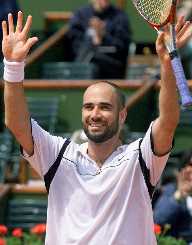 Andre Agassi is a professional tennis player from America. He was born on April 29, 1970, in Las Vegas, Nevada. His parents were Emmanuel Agassi and Elizabeth Agassi. He is considered to be one of the most successful tennis players of all time. Agassi is famous for winning the Grand Slam championship eight times. He also won gold in 1996 Olympic Games.

Andre Agassi was born in Las Vegas in 1970. His father, Emmanuel Agassi, was a former Olympic boxer who represented Iran. His mother was Elizabeth Agassi.

At nine years, Andre Agassi's father pushed him into playing a match for money with Jim Brown after he found him complaining of a cancelled match at a Vegas Tennis Club. Brown lost all the matches to Agassi and handed in the $500 bet to him. It is at this point that Agassi developed a tremendous interest in tennis.

When Agassi was 13 years, he was enrolled in Nick Bollettieri's Academy of Tennis in Florida. Nick spotted the natural talent in Agassi and offered him a free stay in the academy. Agassi's father had paid for only three months in the academy, but Nick returned the money and provided free training to Agassi.

Andre Agassi was enrolled in school. He worked hard but later dropped out of school to pursue tennis. He got a placement in Bollettieri's Academy to sharpen his tennis skills.

Andre Agassi became a professional tennis player at the age of 16. He participated in his first tournament at La Quinta in California where he won his first match against John Austin. He, however, lost his second match to Mats Wilander.

In 1986, Agassi was ranked position 91 in the world. This boosted Agassi's self-confidence that resulted in his first top-rated title in a single match at Sul American Open in Itaparica. This improved his ranking to number 25 in the world.

In 1988, Andre Agassi won Forest Hills WCT, Volvo International, Livingstone Open, Stuttgart Outdoor, Memphis and U.S Men's Clay Court Championships. The win of the six tournaments stamped his position as a professional tennis player. By December 1988, Agassi hit and surpassed $ 1 million in prize money after participating in only 43 tournaments. This was the fastest growth in history. During this period he set a record for most consecutive wins by a male teenager player. Andre Agassi ended the year at position three worldwide behind Ivan Lendl and Mats Wilander. His rise to the third position was phenomenal, and he was named the most improved tennis player in 1988 by both the Association of Tennis Professional and the Tennis Magazine.

Agassi played in the semi-finals of French Open and US Open in 1988. The following year, Agassi entered his very first Grand Slam final at the French Open where he lost to Andres Gomez. In the same year, he reached the Grand Slam Final for US Open where he beat the defending champion Boris Becker in the semi-finals stage. He later lost all the three sets to Pete Sampras in the final.

In 1991, he played with Jim Courier in the French Open Final. Jim emerged victorious in the five-set final. In the same year, Agassi played at Wimbledon where he reached the quarter-finals.

In 1992, Andre Agassi experienced an outstanding breakthrough in the Wimbledon. He defeated Goran Ivanisevic in a five-set final. He beat two Wimbledon champions and was named the BBC Overseas Sports Personality of the Year. In the same year, he played and won Davis Cup for the second time in three years.

In 1993, Agassi won his first doubles title at the Cincinnati Masters together with Petr Korda. In the same year, he suffered injuries that saw him lose the Wimbledon and US Open tournaments. He went for a wrist surgery which took a toll on his career.

In 1994, Andre Agassi got a new coach, Brad Gilbert. He became more tactical and won the Canadian Open. This was a great comeback for him after a successful wrist surgery coupled with the US and French Tournaments loss. He performed exceptionally well in the 1994 US open defeating Michael Chang in a five-set fourth round. In the same year, Agassi became the first unseeded player to capture the US Open by beating Michael Stich in the final.

In 1995, Agassi won his first ever Australian Open beating Sampras. He won three Master Series Events in the year and a total of seven titles. In April 1995, Agassi was ranked the best in the world, a position he held until November when Sampras surpassed him.

In 1996, Andre Agassi failed to clinch notable titles with defeats in the French Open and Wimbledon tournaments. In the same year, Agassi won a gold medal in Olympic Games held in Atlanta. He beat Sergi Bruguera of Spain in the final. He defended his Cincinnati single title.

In 1997, his wrist injury reemerged, and he only played 24 games in the whole year. In the same year, he failed an ATP drug test. This was the lowest year in his career. His world ranking went down to position 141 by November 10, 1997.

In 1998, Andre Agassi worked his way up his career, and he recorded the most achievements of his career playing against highly ranked Pete Sampras and Patrick Rafter. In the same year, he won five titles and climbed to number 6 in the world ranking up from previously held position 110. At the end of the year, Agassi was honoured as the ATP Most Improved Player of the Year. The award was second in his career.

In 1999, he became the first male player to win all four Grand Slam singles titles.  He also won the Career Super Slam and an Olympic gold medal. In the same year, Agassi won the US Open and other five major titles including ATP Masters Series where he beat the world number 1. By the end of 1999, Agassi was ranked best in the world displacing Sampras.

He suffered an ankle injury which impacted negatively on his career. In 2006, he lost his final much in the US Open. He, however, received a standing ovation for his excellent tennis career.

He was named The Most Improved Player of the Year by ATP and Tennis Magazine in 1998.

Awarded the BBC Overseas Sports Personality of the Year in 1992

His biography was the New York Best Seller. He also won the British Sports Book Award in 2010.

On October 2001, he married Steffi Graf. They have two children, Jaden Gil and Jaz Elle.

He wrote and published his autobiography in 2009

In 2001, Agassi opened a college preparatory school to cater for children at risk of not going to school in Las Vegas. He donated $35 million to the school

He formed Athletes for Hope Foundation to encourage athletes to participate in charity work.

Andre Agassi has openly declared to be a Democrat. He has given considerable contributions to Democrat candidates.