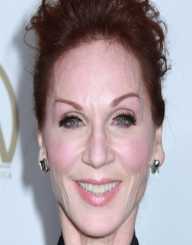 American actress Marilu Henner was born Mary Lucy Pudlowski on the 6 April 1952 in Chicago, Illinois into a family of six children.

Marilu Henner attended Madonna High School in Chicago, Illinois then enrolled at the University of Chicago. During her time at university, she was involved with the Community Theatre. She played the role of Marty in a production of the musical Grease, quitting university in 1972  to travel with the production.

During her time touring with Grease, Marilu Henner had a romance with her co-star, John Travolta. In 1976, Henner relocated to New York where she debuted on Broadway in Over Here! She also appeared in the film Between The Lines (1977). Henner was then cast in the role of Elaine O’Connor-Nardo in the 1978 hit sitcom Taxi which also starred Tony Danza and Judge Hirsch (1978-1983).

Other roles of Marilu Henner include The Man Who Loved Women (1982) alongside Julie Andrews, Kim Basinger and Burt Reynolds; Johnny Dangerously (1984) which starred Michael Keaton; Perfect (1985) starring John Travlta, L.A. Story (1991) with Patrick Stewart and Steve Martin; and the sitcom Evening Shade (1990) with Burt Reynolds. She had her daily talk show, Marilu (1994). Henner appeared in a documentary on comedian Andy Kaufman, Man on the Moon (1999) and she also toured with the stage show Annie Get Your Gun (2000).

Between 2006-2009, Marilu Henner was the host of the series America’s Ballroom Challenge. She also appeared in celebrity editions of The Apprentice in 2008 and 2013. In 2016, she was Derek Hough’s partner in Dancing With the Stars: Season 23. She appeared as herself in Sizzle Reel-Fantastic Memory Lady (2017) and was in film Dead Over Heels: An Aurora Teagarden Mystery (2017).

In addition to her acting career, Marilu Henner is also a bestselling author. Both her parents died in their fifties, and this made Henner conscious of the need to eat well, keep fit and maintain a healthy lifestyle. Her books include: The 30 Day Total Health Makeover: Everything You Need to Do to Change Your Body, Your Health, and Your Life in 30 Amazing Days (2010), Healthy Life Kitchen (2010), Total Memory Makeover: Uncover Your Past, Take Charge of Your Future 2012, Wear Your Life Well: Use What You Have to Get What You Want 2012 and Changing Normal: How I Helped My Husband Beat Cancer 2016.

Marilu Henner has had a number of Golden Globe nominations including Best Actress in a Supporting Role - Television Series for Taxi in 1978, 1979, 1981 and 1983. In 2006, she was inducted into the National Fitness Hall of Fame.

Marilu Henner belongs to a select group of people who have been diagnosed as having Hyperthymesia also known as Highly Superior Autobiographical Memory (HSAM).
Henner revealed this information on 60 Minutes in 2010.