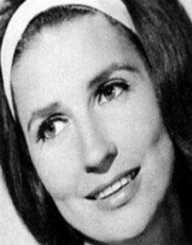 Ina Anita Carter was born on 31st March 1933, to Ezra and Maybelle Carter. She was born in Maces Spring, Virginia, in the United States.

Anita Carter performed both solo and with her sisters and other artists. She, along with her sisters, Helen and June, performed as The Carter Sisters, and Carter played the upright bass. They joined the Grand Ole Opry radio show in 1950.

Anita Carter released her first album in 1962 called Together Again, performing with Hank Snow. She then released two solo albums, the first was in 1962 called, Folk Songs Old and New. The second album was in 1964 and was called Anita Carter of the Carter Family. The girls performed as the opening act for Elvis Presley, and in 1968, Carter once again reached the top ten with I Got You, performed with Waylon Jennings.

Anita Carter released two more albums, in 1972 and 1995 respectively. She released a song called Love’s Ring of Fire, which Johnny Cash heard and loved. He told Carter if her version weren’t successful in a few months he would record it, which he did, renaming it Ring of Fire. The song went on to become of his biggest hits and synonymous with Johnny Cash.

In 1950, Anita Carter married Dale Potter, a fiddler. Her second marriage was in 1953 to a session musician, Don Davis. The couple divorced and then remarried, but they divorced again.

Carter married Bob Wootton in 1974. He was the lead guitarist in Johnny Cash’s band. The couple later divorced.

She had two children, a daughter, and a son.