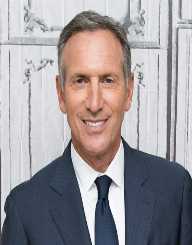 American businessman, Howard Schultz was born on July 19th in 1953. His place of birth was in Brooklyn, Newyork. He majored in communications while at the Northern Michigan University. He later graduated with a bachelor’s degree from the university. Later on, in 1982, he became the retail and marketing director of Starbucks Coffee Company. He was the founder of Il Giornale Company in 1987. After this, he went on to buy Starbucks and became its CEO. A few years later, Schultz resigned as the CEO of Starbucks before returning after eight years.

Howard Schultz is the son of an ex-US army trooper called Fred Schultz. His mother is called Elaine. When he was three years old, they moved to Canarsie and settled at Bayview Housing projects. He was a talented athlete as he outperformed others on the basketball court. He later earned a football scholarship which made him leave Canarsie in 1970 heading to Northern Michigan University.

Howard Schultz graduated from the university in 1975 with a bachelor’s degree. Shortly he got employed in Hammarplast Company which mainly dealt in selling European coffee makers to the U.S. He rose through the ranks of his new job, and he was soon promoted to be the sales director. From his experience in the field, he found out that he was selling more coffee makers to a particular company in Seattle named Starbucks Coffee Company. The numbers kept rising, and Schultz found the place lucrative and worth investing in.

In 1981, Howard Schultz made his first visit to the original Starbucks. During this time, the company had been in operation for about ten years as it had been established in 1971. A year later, in 1982, Schultz was the director or retail and marketing for the young organization. During this period, the company dealt in selling coffee beans and that it was not involved in selling coffee drinks.

In 1983, Howard Schultz was on a trip in Milan, Italy and he noticed something unique about the place. He was amazed at a large number of coffee bars. It is from here that an idea came to mind; that Starbucks should also sell coffee drinks. Upon returning, he tried his best to convince the owners about the thought he had.

Unfortunately, the owners were not into the idea since they had all along been selling coffee beans. Soon, they gave him the chance to try this in one of the branches opening up in Seattle. It was an instant success as it pulled hundreds on a regular basis. It was the birth of coffeehouses in Seattle.

In spite of the success that Schultz had proved to Starbucks owners, they were still hesitant about the whole idea. This left Schultz feeling disappointed and left the company in 1985. He opened up his own Il Giornale Company which was successful right from the start.

After two years, Schultz pulled funds from other investors and purchased Starbucks. This made him the CEO as well as the chairman of Starbucks. As part of his investment plan, he wanted to venture into the American market. He was positive that Americans would pay a higher price for a cup of coffee they loved.

However, it is in 2000 that Howard Schulz announced his resignation from Starbucks as its CEO. 8 years later, he went back to lead the company.

In 1982, Howard Schultz married Sheri Kersch. The couple has two children, Eliahu Jordan and Addison. His son, Jordan writes in the sports section for The Huffington Post.