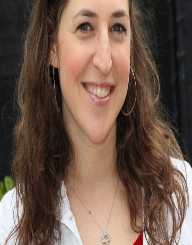 Mayim Bialik is an American actress, actor, and neuroscientist. Born on December 12, 1975, she is known for her role as Russo in the NBC sitcom, Blossom from 1990 to 1995. She was cast in the CBS sitcom The Big Bang Theory as Amy Farrah Fowler, since 2010. For the role, she earned a nomination for the Primetime Emmy Award and won a Critic’s Choice Television Award for Best Supporting Actress in a Comedy Series.

Mayim Bialik gained interest in acting at a very young age and the age of 12; she was already appearing in films. She received acceptance offers from the University of California, Los Angeles (UCLA), Yale, and Harvard during the filming of Blossom. However, she managed to have the acceptance of UCLA deferred. She graduated with a B.S degree in neuroscience, with Hebrew and Jewish studies as minor from UCLA in 2000 and continued with a doctorate in neuroscience completing in 2007. Her dissertation wasHypothalamic regulation in relation to maladaptive, obsessive-compulsive, affiliative, and satiety behaviors in Prader-Willi syndrome (Ph.D.).

As a child actress, Mayim Bialik played young Bette Midler in Beaches, 1988 and Pumpkinhead at the age of 12. She also had guest roles in television shows like Facts of Life, Webster, Murphy Brown, and Beauty and the Beast. She appeared in Michael Jackson’s “Liberian Girl” music video. She was a cast in NBC’s sitcom Blossom, premiered on January 3, 1991, and aired through May 1995. She was a guest celebrity contestant in the season two of the game show Where In the World Is Carmen Sandiego’s episode “Disturbing The Heavenly Peace.”

In 1904, he had a major role in the Woody Allen comedy film Don’t Drink the Water and since 1995, lent her voice to characters in cartoons and TV shows including Kim Possible, Nickelodeon’s Hey Arnold!, The Real Adventure of Jonny Quest, Disney’s Recess. Bialik works include Kalamazoo?, 2005, Curb Your Enthusiasm, Fat Actress, Saving Grace, The Secret Life of the American Teenager,  What Not To Wear, and The Flight Before Christmas among others.

Ain August 2015, Mayim Bialik out doored Grok Nation aimed at bringing people of different ages and background together to deliberate on contemporary issues. It also allows readers to have an online conversation to provoke an offline action and bring people together towards changing the world. To grok is “to understand profoundly,” a word from the science fiction novel Stanger in a Strange Land, 1961 by Robert A. Heinlein.

Aside from acting Mayim Bialik has authored, some of which were co-authored by pediatrician Jay Gordon. The book Beyond the Sling: A Real-Life Guide to Raising Confident, Loving Children the Attachment Parenting Waywith Jay Gordon, 2012 and later releasedMayim's Vegan Table: More Than 100 Great-Tasting and Healthy Recipes from My Family to Yours also with Jay Gordon in 2014. This was followed by Girling Up: How to be Strong, Smart and Spectacular, 2017 andBoying Up How to be Brave, Bold and Brilliant in 2018.

On August 31, 2003, Mayim Bialik married Michael Stone. The couple has two sons, Miles, and Frederick. Bialik and Stone divorced in November 2012. She is a vegan and one of the founding members of the ShamayimV'Aretz Institute, a Jewish organization that advocates for the ethical treatment of animals.