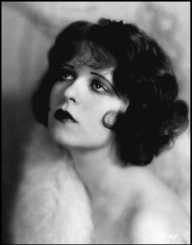 Clara Bow was born on July 29th, in 1905. She was born in Brooklyn, New York. Bow was predominantly admired for her sexuality long before Marilyn Monroe was born. She entered the film industry with a bang as she went on to dominate for almost a decade. She began acting during her teens. Later on, she featured in hit films that earned her recognition such as Black Oxen-1923, and Wine¬-1924. In 1927, Bow became a star after featuring in the romantic comedy –It. Clara Bow died at the age of 60.

Clara Bow was born on July 29th, in 1905. He was the youngest daughter of Robert and Sarah Box. She had other two sisters who sadly died while they were still infants. This made Bow the only daughter to survive to the Bow’s family. Clara’s father was abusive and that he was often absent from the family. When she was 16 years old, her mother suffered a head injury resulting from the fall she made from a second-story building. This left Bow in charge of taking care of her sick mother while his father, Robert was not present.

With time, Bow dropped out of school. She loved heading to the movies as it was one of the ways of escaping the troubles she experienced at home. While still in her teens, she managed to compete in one of the magazine's beauty competition. In the process of doing this, she was cast in Beyond the Rainbow. Bow acting prowess impressed the director of the film, Christy Cabanne. Unfortunately, she was not part of the final print. This frustrated her.
Clara Bow did not lose hope easily as she went on to feature in silent films such as Down to the Sea in Ships-1922.

Sooner or later, Clara Bow signed a career-changing deal with Preferred Pictures. She still had the advantage of working with other studios. During this period, she played leading roles in films such as Grit- 1924, Plastic Age- 1925, and in the Paramount Pictures movie, Dancing Mothers of 1926.

In 1927, Clara Bow starred in the romantic comedy that earned her popularity all over. This was the It movie of 1927. The story revolved around a shop girl that fell head over heels for her boss in a store where she works in. The hit film was based on the novella by Elinor Glyn. Bow became a household name as a result of her imagery portrayal in the movie. Soon, her style was adopted by numerous women nationwide.

This was not the end of her success story as she later starred in Wings during the same year. The movie setting was in World War I. This movie earned Bow her first Oscar award for best picture.

With the success that Clara Bow had amassed in her film career, she diversified and tried out her luck in sound films. She succeeded here as she topped the box office with sound films such as Dangerous Curves, The Saturday Night Kid, and The Wild Party.

Clara Bow had numerous relationships with men. Sources claim that this was once her own major problem she publicly gossiped. Bow, however, had two sons with a cowboy named Rex Bell.

Clara Bow suffered a heart attack and passed away on September 27th, in 1962. She died at the age of 60.