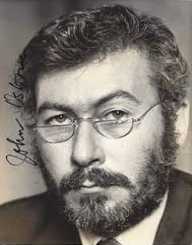 British playwright John Osborne was born on the 12 December 1929 in Fulham, London to Nellie Grove and Thomas Osborne. His father was an advertising copywriter as well as a commercial artist, and his mother was a barmaid. He was raised in Surrey. As a child and young person, he admired his father but had a life-long fractious relationship with his mother.

When his father died in 1941, he left his son an insurance settlement which enabled him to study at Belmont College, a boarding school in Devon, England. John Osborne left after a year because of a physical altercation with the headmaster.

John Osborne then began working in repertory theatre, touring the UK and performing in a variety of plays. This inspired him to start writing plays of his own. He co-wrote his first play The Devil Inside Him (1949) with Stella Linden. The play was performed in Huddersfield in 1950 but did not make an impact. He wrote six more plays which also went largely unnoticed. His eighth play, Look Back in Anger, written in 1955 made his name as a playwright and is credited with reviving British theatre.

John Osborne submitted Look Back in Anger to the English Stage Company at the Royal Court Theatre and George Devine, the artistic director, was impressed with it.  Devine assisted Osborne by employing him as a script reader as well as an actor and the play debuted in May 1956. Look Back in Anger was a massive hit. The content of the play earned Osborne the label of being one of the angry young men of his generation.

His next play staged at the Royal Court was The Entertainer (1957), after Laurence Olivier had commissioned Osborne to write a play for him. Osborne’s third play at the Royal Court was Epitaph for George Dillion (1958)  All three  Royal Court productions proved successful and established Osborne as a writer for stage, television, and film.  His next production, a West End musical, The World of Paul Slickey (1959), was a flop. Luther (1961) proved to be a critical and commercial success. Other plays included Evidence (1964) and A Patriot For Me (1965).

He wrote two autobiographies which were combined into Looking Back: Never Explain, Never Apologise and published in 2014. John Osborne died on the 24 December 1994 in Clunton, Shropshire, England. He had been suffering from diabetes and died of heart failure.