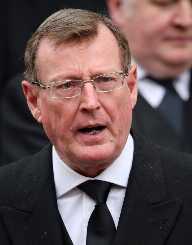 David Trimble was born in Bangor, County Down, United Kingdom on October 15, 1944, to William and Ivy Trimble. David was able to attend the Bangor Grammar School, though they were considered to be in the lower-middle class cadre of Presbyterians.

He studied at Queen’s University of Belfast and graduated with Bachelor of Laws in 1964. He was awarded the McKane Medal for Jurisprudence during this time.

David became a professor at the University of Belfast after graduation. In 1973, he was appointed as the Assistant Dean of the Law faculty. Later, he made his way up to become the Head of the Department of Commercial and Property Law.

William David Trimble was the first Minister of Northern Ireland. During his lifetime, he made history through his attempts to find a peaceful solution to the continuing conflict in Northern Ireland. The country was wrapped in a turf war between Catholics and Protestants during his early years. The division was so diverging that, that time it was called The Troubles.

The two parties have a compelling difference on their views on what should happen with the government. The Protestants from the Unionists party wanted to remain a part of the United Kingdom while the Nationalists who were mostly Catholics, wanted to join a United Ireland. With his unifying and honorable leadership, Trimble successfully ended the Troubles.

David Trimble was a strong supporter of the Unionist in his early political career, and he promptly gained popularity among the group. He left his teaching career when he became more involved in politics. At this time, he became more compromising and went on to initiate a peaceful solution for Northern Ireland.

His endeavors are internationally recognized as a breakthrough in the devastating conflict as he remained open-minded. He persisted in his dedication to destroying unlawful weapons and increasing civil liberties. Even after ending the Troubles, he continued to strive for peaceful solutions in his home country.

David Trimble was elected to the Northern Ireland Constitutional Convention for the Vanguard Unionists Progressive Party in 1975. He eventually became a deputy leader of the party. The party was recognized for its opposition to the reigning British government’s rule over Northern Ireland.

In 1977, David became a member of the conservative party in Northern Ireland, the Ulster Unionist Party. The party was divided at that time over the issue of integration with the United Kingdom and the reinstatement of Northern Ireland’s government.

He resigned from his academic career in 1990 when he was elected to Parliament. He won a 58% majority. He was also one of a few politicians who supported the Islamic government of Bosnia. Moreover, he was known that he had an unforgiving view towards Catholics.

David Trimble became the leader of the Ulster Unionist Party in 1995. It was an astounding victory as he not only defeated favorite front-runner John Taylor but also won support during the outcome of the controversial Drumcree conflict.

David Trimble was overwhelmingly elected as the First Minister of Northern Ireland in 1998 as a result of his 1998 Belfast Agreement. Terms of this agreement involved the decommissioning of the IRA which Trimble grappled to execute during his entire time in office.

David had his office as First Minister was put on hold when his party refused to hand over weapons of war. This was in the year 2000. He was back in the office after few months but continued to have problems with decommissioning the IRA. He resigned after one year, but once more, got re-elected. However, the office was again suspended.

Before David Trimble won the Nobel Peace Prize, he led the controversial Drumcree conflict. It was about the conflict between Protestant Unionists and Catholic Nationalists. During a parade on July 12 every year, he was involved in opposing a police ban for a Protestant to march through the Catholic quarter. This dispute raised international awareness as it caused violence and protests, between 1995 -2000.

During 1998, David’s peace talks caused such commotion on both political sides that it was not safe for him to visit some districts. The Agreement was eventually accepted, and he was elected as First Minister by the majority.

For the first time since 1922, he met with the Sinn Fein leader to discuss a compromise. It was a historic meeting face-to-face by the Protestant leaders from Northern Ireland with the Catholic leaders from the republic. They were both hesitant, avoided eye contact with each other and did not shake hands.

After leaving office, his political life persisted. In 2006, David Trimble received a lifetime appointment to the House of Lords, the Upper house of British Parliament. In 2007, Trimble chose not to participate in the new elections, though the Northern Ireland Assembly was reinstated. He opted instead to join England’s Conservative Party with the interest of intensifying his involvement in British politics.

In 1968, David Trimble and Heather McComb married but the marriage ended in divorce in 1976.

David Trimble married his former student, Daphne Elizabeth in 1978. They have four children together. They both share the same political passion. His wife also served as a member of the IRA.