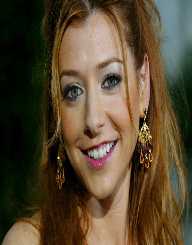 Alyson Hannigan was born in Washington, DC on the 24 March 1974 to Emilie Posner and Al Hannigan. Hannigan’s parents divorced when she was young. She lived with her mother in Atlanta, Georgia until the age of eleven, when they moved to California.

Alyson Hannigan was a pupil at North Hollywood High School and after graduating in 1992 enrolled at California State University. She majored in psychology.

Alyson Hannigan appeared in television commercials from a young age. Early appearances in film and television include My Stepmother is an Alien (1988).She was fourteen at the time.In 1989, she was nominated for the Young Artist Award for the Best Young Actress in a Motion Picture Comedy or Fantasy for her role in My Stepmother is an Alien. Her first part in a television series was in Free Spirit (1989). During the 1990s Alyson Hannigan appeared on Picket Fences (1992), American Pie. Almost Home (1993) and Touched by an Angel (1994).

Her breakthrough role came playing Willow Rosenberg in the television series Buffy The Vampire Slayer (1997-2003). The show was very successful and quickly developed a strong fanbase. Alyson Hannigan starred in American Pie (1999) which was a hit. Alyson Hannigan was also in American Pie 2 (2001) and American Wedding (2003). She starred in the television series How I Met Your Mother, appeared in the West End in When Harry Met Sally (2004), voiced over as Melody Juniper in Season 22 of The Simpsons and hosted the third season Pen and Tell: Fool Us (2016).

Alyson Hannigan was a member of the cast who won the Young Hollywood Awards Best Ensemble Cast for American Pie (1999). She won the 2003 Teen Choice Award for Choice TV Sidekick for Buffy The Vampire Slayer. Alyson Hannigan also won the 2003 SFT Awards for Best Science Fiction or Fantasy Actress and a Saturn Award for Best Supporting Actress on Television 2002.

Alyson Hannigan married Alexis Denisof in 2003. They have two daughters Satyana and Keeva.