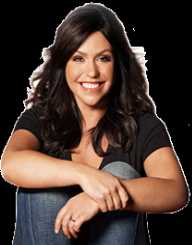 Rachael Ray, three times winner of the Daytime Emmy Award, was born on August 25, 1968, in Glens Falls in New York, moved with her family to Lake George when she was 8.Her mother took care of many restaurants in New York's Capital District. Some of them were famous like Howard Johnson's, etc., This way she was always connected to and spent her childhood close to the food industry and resulted in developing her interest towards cooking techniques.

Rachael Ray won many awards, accolades and the hearts of millions of viewers, and became one of the most beloved TV stars. Rachael Ray is also well known as best selling cooking guide/books author. Happily Married to John Cusimano, Rachael owns a home at Manhattan's Greenwich Village. Being a dog lover, she prepares good food for her pit bull and also shares the recipes with Nutrish who are a big brand in and sell dog/pet food.

Rachael Ray moved to New York City in 1995 to pursue her career and worked at the candy counter at Macy's. She managed well in the fresh foods department there. In due course, Raechel Ray worked for / managed many outlets in the food industry. She handled various pubs, hotels, and restaurants in upstate New York like The Sagamore, Lake George.

Rachael Ray worked at a store where people were unenthusiastic to cook. This gave her the opportunity to teach them, train them with the techniques to cook meals in less than 30 minutes. She gives credit to this experience which made her famous. The local CBS TV affiliate also approached her to host a show on the weekly segment on their newscasts. She did programmes on public radio, made her way to better exposure. Also, she published her first book before she got into her mainstream business. 30 Minute Meals, by Rachael Ray was one of the most successful cooking show, broadcasted on Food network from 2001-12, a total of 27 seasons.

Rachael Ray spiced up her talks with very catchy words and phrases like "Oh my gravy", EVOO (extra virgin olive oil) which was included in The Oxford American College Dictionary in 2007, Yum-O!, which is also the name of her non profit concern/organization, which helps people by providing food to hungry children, funds cooking education and teaches families to cook healthy food.

In 2008, another big hit of Rachael Ray was the television series broadcast by Food Network, which was shot in various European countries. Also, she started her new gig as a television executive producer for the TV series in Food Network called Viva Daisy! Apart from cooking shows and various TV series on food network, she also hosted daytime TV talk shows.

Products endorsement also play an essential role in the career of Rachael Ray. She was known for several big brands like Dunkin' donuts, Nutrish, WestPoint Home, Nabisco Crackers (as the spokesperson), and many more. Rachael Ray became very famous and started to appear in magazines. The Reader's Digest Association launched her magazines every month 2005 onwards. She also posed for FHM earlier in 2003.

In 2009, Forbes magazine published that Rachael Ray's earnings stood at $15 million at the end of June 2009. She was also ranked as the 79th most powerful celebrity in the world.

It was on September 24, 2005, when Rachael Ray chose to marry John Cusimano, at Montalcino, Tuscany, Italy. Her husband is an American lawyer also the lead singer of the rock band The Cringe.

Rachael Ray, in her free time, loves to spend time with her husband, family, and his beloved pit bull. She has homes in Lake Luzerne, New York, and Manhattan's Greenwich Village.