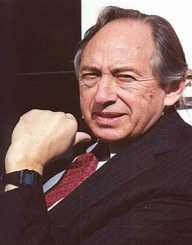 Alvin Toffler, an American writer, and futurist, was born on 4th October 1928 in New York City. He was then brought up in Brooklyn. His parents, Sam Toffler and Rose (Albaum) Toffler were both Jewish immigrants from Poland. Toffler was raised in a joint family comprising his parents, one younger sister and his Uncle and Aunt.

According to Toffler, his uncle and aunt were depression-era literary intellectuals and always discussed enthusiastic concepts among themselves. Toffler’s writing potential was greatly motivated and encouraged by this Aunt-Uncle duo.

Alvin Toffler studied at New York University and subsequently secured his B.A Major in English literature in 1950. He came across his future wife, Adelaide Elizabeth Farrell (Heidi) when she was studying a graduate course in linguistics at the New York University.

Both of them were radical thinkers and were firm believers of the Left Wing Ideology. The radical line of thinking led both of them not to pursue their studies further, and they left the University together and moved to the Midwest of United States. After the relocation, they married there on April 29, 1950.

Alvin Toffler and Heidi Toffler spent the next five years together as blue-collar workers on Assembly Lines. Simultaneously, they were studying Industrial Mass Production in their daily work. They were preparing themselves for their writing career by seeking experience from their daily chores.

After five years, in their first factory jobs, Alvin became a millwright and welder, and Heidi chose the position of a union shop steward in the Aluminium Foundry. Alvin tried to write poetry and fiction in the evening after returning from his day’s work but quickly found that he is not capable enough to write either.

He bagged a position at a union-sponsored newspaper by the sheer weight of his involvement in practical labor management and was transferred to its Washington bureau in 1957. He then worked for a Pennsylvanian daily newspaper as a White House correspondent covering Congress and the White House for the next three years.

In 1959, 'Fortune Magazine,' a New-York based publication, invited Alvin Toffler to join them as labour, business, and management columnist. Toffler returned to New York City along with his wife, and after serving Fortune Magazine for around three years, he left the job in 1962.

Immediately after that he started to work as a freelancer. As a freelancer, The Playboy interviews with Russian novelist Vladimir Nabokov and Ayn Rand in 1964 were regarded among the magazine's best at that time.

Alvin Toffler joined IBM and wrote a research paper on the social and organizational impact of computers. During the research stage, he came in contact with many luminaries of the digital world including some earliest computer personalities and artificial intelligence researchers and proponents.

Xerox invited Toffler to write an analysis on its research laboratory, and AT&T solicited strategic guidance from him. His study divulged the fact that the company should have been liquidated ten years earlier before the Government intervention.

'Future Shock,' an international bestseller, was published in 1970. The research work for Future Shock was initiated in the mid-1960, and after five years of extensive research, the book was published.

In this book, Alvin Toffler tried to explain the rapidly changing phenomenon of digitization in a very short span of time and its psychological impact on the masses. The highly celebrated book that painted a picture of what future societies would look like has sold over 6 million copies worldwide. The book has been translated into many languages and has never been out of print.

Alvin Toffler's second big book and a sequel to 'Future Shock,' 'The Third Wave' came out in 1980. The central theme of the book was the transition of the world from the industrial era to the digital era. In this book, he predicted the future technological advancements such as cloning, personal computers, the Internet, cable television and mobile communication. A very popular term in today's times, 'information overload' was coined by Toffler.

The third book in his futurist trilogy, ‘Powershift: Knowledge, Wealth and Violence at the Edge of the 21st Century’ was published in 1990. He further wrote ‘War and Anti-War: Making Sense of Today’s Global Chaos’ around the same time.

In 1996, Alvin Toffler along with Tom Johnson co-founded an advisory firm which implemented the ideas that Toffler had written on and named it ‘Toffler Associates.’  The firm collaborated with various international organizations in the US, South Korea, Mexico, Australia, etc.

Expanding the ideas of 'The Third Wave,' he came out with another book in 2006 titled ‘Revolutionary Wealth: How it will be created and how it will change our lives.’

Alvin Toffler met with his wife Heidi during his educational sojourn with the New York University. They took the marital vows on April 29, 1950, after relocating to the Midwest. His wife was also a futurist writer and had major influences on his work. Their only child Karen Toffler died at the age of 46 after a decade-long battle with Guillain–Barré syndrome.