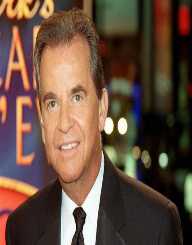 American television and radio personality Dick Clark was born on the 30 November 1929 in Mount Vernon, New York. He was one of two sons born to Julia Fuller and Richard Augustus Clark. His brother Bradley was killed in World War II. As a boy, Clark became fascinated by the radio.

After graduating from A.B. Davis Middle School, Mount Vernon, Dick Clark studied at Syracuse University, New York. In 1951, he obtained a degree in advertising and media. During his student years, Clark worked at various radio stations

Dick Clark rose to fame in the early 1950’s when he was appointed the substitute host of Bob Horn’s Bandstand on WFIL in Philadelphia. By 1956 he was the host of the show. Then in 1957, ABC took up the show, changing the name to American Bandstand.

Dick Clark was acknowledged as being responsible for making rock ‘n roll music acceptable to parents, and the show became increasingly popular. In 1964 the show to Los Angeles just as the surf sound of California was becoming popular. During the 1960s, it provided a platform for musicians to perform live and artists who appeared around that time included Chubby Checker, Stevie Wonder, The Beach Boys, Johnny Cash, Buddy Holly and Simon and Garfunkel. Clark also hosted concert tours. From 1973 until 1975 Clark was executive producer of In Concert.

Beginning in 1972, Clark produced New Year’s Rocking Eve which by the late 1970s became the most viewed New Year broadcast in the United States. Clark suffered a stroke in December 2004. His first television appearance after the stroke was when he co-hosted the annual New Year’s Rocking Eve show from Times Square with Ryan Seacrest on the 1 January 2006.

Clark was also involved in television and film production with company Dick Clark Productions. One of his initiatives was the American Music Awards.

In 2004 Dick Clark had a stroke which impacted on his speech. He subsequently suffered from coronary heart disease.

His first marriage was to Barbara Mallery (m.1952-div.1961). They had one child together, a son Richard. The following year he married Loretta Martin, and they had two children: Duane and Cindy, before divorcing in 1971. Clark’s third wife was Kari Wigton (1977-2012).

Dick Clark died on the 18 April 2012 following a heart attack.