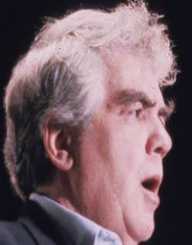 Jimmy Breslin was an American journalist and author, known for telling the stories of the working class.

James Earle Breslin was born in Queens, New York, on October 17, 1928. His father, James, was a piano player. He was an alcoholic who went out to the store one day and never returned.

His mother, Frances, worked as a high school teacher and as an investigator in the New York City Welfare Department. He had a sister named Deirdre. He enrolled at Long Island University, but he dropped out after two years.

Jimmy Breslin began working as a copy boy for the Long Island Press at the age of 17. After dropping out of college, he decided to become a columnist. His accomplishments started piling up quickly. He became a contributor for the Daily News, the New York Herald Tribune, The Daily Beast, Newsday, and many other publications.

Breslin’s columns were mostly about ordinary people he talked to throughout New York City. One of his best-known pieces was published the day after the funeral of President John F. Kennedy. It spoke of the man who dug up his grave. That was one of the typical theme in his writings – the way big events affected the regular people.

Throughout his investigative journalism, Breslin managed to make connections with various criminals and the Mafia. In 1970, Irish mobster Jimmy Burke attacked him because of an article he wrote exposing his associate. Breslin suffered a concussion and a nosebleed, but his health was not permanently damaged.

In 1976 and 1977, a serial killer known as Son of Sam murdered and injured many people around New York City. Breslin was one of the many journalists who covered the story.

The killer, who was later revealed to be postal worker David Berkowitz, sent him a letter. He thanked him for his interest, said he liked his writing, and also threatened him. Breslin took the note to the police, and also published it in the Daily News.

In 1986, Jimmy Breslin started his own late night television show on the ABC network. It was called Jimmy Breslin’s People, and it aired twice a week. He interviewed poor people in their homes. Many of them were former prisoners. The network started neglecting the show, changing the airtime and replacing it with other shows. He was angry at that, so he ended the show only three months after it began.

In 1990, Breslin’s coworker Ji-Yeon Mary Yuh said that one of his articles was sexist. He responded with racist remarks. Asian Americans and anti-hate groups publicly went against him.

He made an appearance at the Howard Stern Show, where he joked about his response and Asians in general. Because of this controversial appearance, the editor of Newsday suspended him for two weeks. After that, Jimmy Breslin apologized.

Jimmy Breslin won several awards for his work. The most important ones were the George Polk Award for Metropolitan Reporting and the Pulitzer Prize for Commentary.

Jimmy Breslin published numerous novels throughout the years. Many of them revolved around criminal and political stories. He also wrote nonfiction, especially biographies. His most famous book is The Good Rat: A True Story. It talks about the prominent figures in the Mafia.

In 1971, he was one of the speakers at Harvard’s Class Day. In 1978, he appeared in the romantic drama film If I Ever See You Again. He played the main supporting role. He had almost no previous acting experience.

Jimmy Breslin married his first wife, Rosemary, in 1954. They were together until her death in 1981, and they had six children together. In 1982, he married Ronnie Eldridge, a member of the New York City Council. He spent the rest of his life with her.

Jimmy Breslin passed away in his home in Manhattan on March 19, 2017, after a battle with pneumonia.