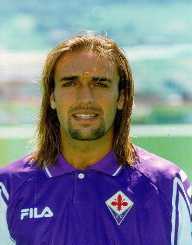 Born on February 1, 1969, Gabriel  Batistuta is a former Argentine prolific football striker. Best known as El Angel Gabriel, or Batigol, he started his professional football career in 1988 in Argentina and since played for clubs like Newell’s Old Boys, River Plates, Borca Juniors and Florentina where he spent most of his footballing career. The skillful and talented player’s career in Italy was flamboyant as Gabriel  Batistuta became the all-time high top scorer for Fiorentina having scored 184 goals in 318 matches. This also Batistuta made him the 12th all-time highest scorer in the Italian Serie A.

Gabriel Batistuta was born on February 1, 1969, in Avellaneda, Santa Fe, Argentina to Omar Batistuta and Gloria Zilli. His father was a slaughterhouse worker and his mother a school secretary. Gabriel  Batistuta had three other sisters Elisa, Alejandra and Gabriela and grew up near the city of Reconquista. Growing up, Gabriel  Batistuta was more into sports like basketball because of his height and others but not football.

Gabriel  Batistuta only gained interest in football after Argentina won the 1978 FIFA World Cup being particularly impressed with the skills of Mario Kempes. He then started playing on the streets with his friends and in the Grupo Alegria club. Gabriel  Batistuta later joined the Platense junior team where he was selected for the Reconquista team, which played against Newell’s Old Boys to win the provincial championship.

After scoring two goals against Newell’s Old Boys in the provincial championship, Gabriel  Batistuta caught the team and was signed in 1988. His first year with Newell’s was marked with difficulties as he was away from home and the family. Gabriel  Batistuta also had weight issues, and that slowed his game. After spending a year with the team, Gabriel  Batistuta was loaned to Deportivo Italiano of Buenos Aires and participated with them in the Carnevale Cup in Italy scoring three goals to earn the top scorer.

Gabriel  Batistuta made a giant move to Argentine club River Plate in mid-1989. He scored an impressive 17 goals during the season,  but after a new coach, Daniel Passarella took over, he was redrawn from the first team. Though Batistuta said he had no dispute with the coach, Passarella later stated that "when Batistuta finds a team that will be able to play to him he will be lethal."  Gabriel  Batistuta joined River Plate’s arch rivals, Boca Juniors in 1990 where he struggled at the initial stage. Gabriel  Batistuta was able to find his feet with the support of coach Oscar Tabarez, who placed him in a position that fits his play, the center of attack. That season, Gabriel  Batistuta became the top scorer, and Boca won the championship.

Gabriel  Batistuta picked his scoring boots in the 1995-1995 Serie A season scoring 26 goals to become the top scorer. That season, he broke Ezio Pascutti’s 30-year-old record after scoring in all the first 11 matches. The 1996-1996 season was very promising for Fiorentina, and even though it could not win the league title, the team placed fourth with Batistuta, Francesco Baiano and Manuel Rui Costa helping the team to go 15 matches unbeaten. In that season, he helped the club to win the Coppa Italia and Supercoppa Italiana. Since his dream was to win the Scudetto, Gabriel  Batistuta at this time was in search for a bigger club with a high rate of winning the league, and this led him to Roma

After an unsuccessful attempt by Fiorentina to win the 1999-2000 season and subsequent elimination from the Champions League, Gabriel  Batistuta left the club to join Roma in a 3-year deal worth 70 billion lire and a personal earning of 14.8 billion Italian lire per year before tax. His personal fee became the highest paid to a player over 30 years. His move was considered just right as Roma won the 2000-2001 Serie A and that was the first since 1983. Gabriel  Batistuta scored 20 goals that season is making him change his jersey number from 18 to 20 to reflect his goals.

Gabriel  Batistuta began to battle with series of injuries, which affected his performance. With his form declining, he was loaned from Roma to Inter Milan. At Inter he still struggled with his form scoring just two goals in 12 matches. He then sought for an unsuccessful deal to Fulham in England but finally moved to Al-Arabi in Qatar in a deal worth $8 million. While there he made a record by scoring 25 goals to beat Qatari legend, Mansour Muftah for most goals scored. H Batistuta retired from football in 2005 due to injuries.

Gabriel Batistuta has been married to Irina Fernandez since December 28, 1990, at the Saint Roque Church. The couple currently has four children, Thiago, Lucas, Joaquin, and Shamel. Despite his successful football career, he prefers to remain on a low-key being a family man.