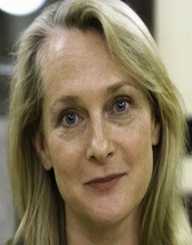 American writer Piper Kerman was born in Boston, Massachusetts on the 28 September 1969.

Piper Kerman was a pupil at Swampscott High School, Massachusetts (1987) before studying at Smith College (1992).

Piper Kerman met a woman in the early 1990s who was part of an international drug ring and was induced to smuggle $10,000 between Chicago and Brussels in Belgium. A few years later, in 1998, Kerman was indicted for drug trafficking and money laundering. She was sentenced to 15-months imprisonment in a minimum security prison FCI Danbury in Connecticut and was released after 13 months. The website, The Pipe Bomb, was a record of her life in jail.

Piper Kerman wrote a memoir about her experience in jail called Orange is the New Black: My Year in a Women’s Prison (2010).  The memoir was adapted for television and was shown on Netflix with Taylor Schilling portraying Kerman. The show has run for six seasons. Kerman is now involved with the Women’s Prison Association and spends time lecturing to various groups of students and interested parties. She works with nonprofits and also teaches writing at the Ohio Reformatory for Women and the Marion Correctional Institution, both in Ohio.

Kerman works actively to improve and advocate on issues relating to women in prison. She is also on the board of the Women’s Prison Association, the PEN America Writing for Justice Fellowship advisory board, Healing Broken Circles, and JustLeadership USA. She has appeared before the U.S. Senate Judiciary Subcommittee on the Constitution, Civil Rights and Human Rights on matters such as women prisoners and solitary confinement. She has also spoken on White House about Champions of Change and teaches writing in two state prisons in Ohio in association with Otterbein University.

Piper Kerman has said that she considers herself part of the gay community as she is bisexual. She married Larry Smith in 2006.

The John Jay College Center on Media, Crime & Justice presented Piper Kerman with the Justice Trailblazer Award (2014). She has also received the Constitutional Commentary Award from The Constitution Project. In 2015, the Equal Justice Initiative named Kerman a Champion of Justice.