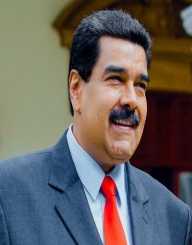 Venezuelan politician Nicolas Maduro was born Nicholas Maduro Moros on the 23 November 1962 in Caracas, Venezuela to Nicholas Maduro Garcia and Teresa de Jesus Moros. His father was a trade union leader who died in a car accident in 1989.

Nicolas Maduro considers himself of mixed race ancestry, with his genetic makeup drawn from the indigenous people of African, America, and Europe. One set of grandparents were Jewish, and at some stage, the family converted to Roman Catholicism. Maduro grew up in a working-class area of Caracas and had three sisters.

Nicolas Maduro was a pupil at Liceo Jose Avalos High School, El Valle. He dropped out of high school, but while there he was involved with the student’s union.

The Caracas Metro Company employed Nicolas Maduro as a bus driver. In the early 1980s, he was representing the bus drivers of the company. During 1983, he acted as a bodyguard for presidential candidate Jose Vicente Rangel. In the mid-1980s, he traveled to Cuba and spent a year at the Escuela Nacional de Cuadros Julio Antonio Mella which was run by the Union of Young Communists.

Nicolas Maduro met Hugo Chavez in 1992, and when Chavez was jailed for his role in the 1992 Venezuelan coup, Maduro campaigned for his release. He founded the Movement of the Fifth Republic and in 1998, campaigned for Chavez when he ran for president of the country.

Because of ill health, Chavez endorsed Nicolas Maduro as his successor on the 9 December 1912. When Chavez died of cancer in early 2013, Maduro was sworn in as interim president of Venezuela on the 8 March 2013.

On the 14 April 2013, Nicolas Maduro had a narrow victory over Henrique Capriles Radonski when he won the presidential election. On the 19 April 2012, Maduro was as declared president of Venezuela. In late September 2013, Maduro expelled three U.S. diplomats. Student protests and economic problems marked his first term.

He also called for direct talks with President Barack Obama. In January 2016, Maduro declared that his country was experiencing an economic emergency and in May 2016, a constitutional crisis. By late October 2016, Maduro called a meeting of political opponents in an attempt to reach a political compromise.

The U.S. Treasury Department froze Maduro’s assets subject to U.S. jurisdiction in July 2017. U.S. citizens were also barred from dealing with Maduro because of sanctions.

Nicolas Maduro ran for re-election, and on the 20 May 2018 won 68% of the vote, with a voter turnout of 46%. Soon afterward, Canada and 14 Latin American countries known as the Lima Group, issued a statement declaring the vote illegitimate. Maduro survived an assassination attempt in August 2018, with six people later arrested.

Nicolas Maduro's first wife was Adriana Guerra Angulo. The couple had one child, a son, Nicolas Maduro Guerra. Maduro’s second wife was politician Cilia Flores whom he married in 2013.