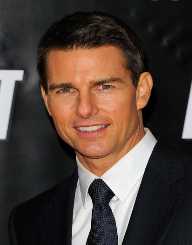 Tom Cruise was born on July 3rd, 1962. His birthplace was in Syracuse, New York. He is an American star who is best known for the hit movie series Mission: Impossible. His interest in acting began while he was still in high school. Other movies that made him famous in the film industry include the Jerry Maguire film. Part of his personal life has been put on focus by the tabloids more so after tying the knot with celebrities such as Katie Holmes and Nicole Kidman.

His father’s career was quite demanding, and therefore the family had to move around a lot for his convenience. Mapother was an abusive father, and he never spared Cruise at the slightest mistake that he did. Cruise’s father later got employed in the Canadian Armed Forces. This meant that the entire family also had to move. Shortly after relocating to Canada, his parents separated. Cruise and his sisters migrated back to the United States. At the time of his parents’ divorce, Cruise was only 11 years old.

Her mother later remarried when they had shifted yet again to Glen Ridge, New Jersey. Academically, Cruise did not perform well as the family had dyslexia. Nonetheless, this did not prevent him from excelling in athletics. In fact, Cruise had the vision of engaging in wrestling as a professional wrestler. This changed after injuring his knee while he was still in high school.

Prior to trying his luck in acting, Cruise had tried out becoming a priest while he was in his late teens. Nevertheless, this did not work out for him, and he made up his mind on trying to make a difference in the film industry. His first move was to leave school and travel to New York. At first, things were not smooth as he had to struggle through the auditions. In 1981, light shone on his career path after landing a role in Endless Love. He was 19 years old when he featured in his movie.

During the same year, Cruise went on to play the role of a wild military student in Taps-1981. Two years later, he was among the cast in The Outsiders-1993. The same year, he featured in Risky Business and All the Right Moves. These movies were identified as career-makers for the young and upcoming star.

In 1985, Legend was released with Cruise being the lead actor. This was a high budget movie that failed at the box office. The following year made a huge difference in Cruise’s career after appearing in Top Gun 1986. The release of this movie made Cruise cement his recognition as a movie star in Hollywood. This marked the foundation of his success as the subsequent movies hit the headlines including The Color of Money-1986, Rain Man-1988 and Born on the Fourth of July -1989.

The 90s era was successful in Cruise’s career as he managed to star in hit films such as Far and Away-1992. This was a romantic adventure film where Cruise starred alongside Nicole Kidman. Next hit film in line was A Few Good Men-1992 which was a legal drama. In 1993, Cruise did not go far off from the legal sphere as he starred in yet another legal thriller, The Firm. In 1994, he shifted gears and ventured into horror films by releasing Interview with the Vampire-1994. Soon, the romantic drama Jerry Maguire came out in 1996. In 1999, he acted again with Nicole Kidman in Eyes Wide Shut. It is still during the 90s era that Cruise landed the role that made him famous to date, Ethan Hunt in the movie series Mission: Impossible. Its first debut of the film series was in 1996. After this, several others have followed suit including the most recent Mission: Impossible – Rogue Nation which was released in 2015.

In 1987, Tom Cruise got married to Mimi Rogers, an actress. The couple divorced three years later in 1990. Later that year, he went on to marry Nicole Kidman who was also an actress. Together they adopted two children before separating. Cruise’s third marriage was with Katie Holmes and that they had a daughter together. In 2012, they divorced.