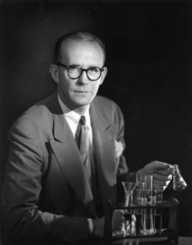 Willard Frank Libby was born 17th December 1907, in Grand Valley, Colorado, United States. He was born to Ora and Eva Libby. Willard Frank Libby had two brothers, and two sisters. He came from a farming family, and went to a small local schoolhouse to begin his education.

The family moved to Santa Rosa, California, when Libby was five. After primary education, Willard Frank Libby was enrolled at Analy High School, and he graduated in 1926. Whilst in high school, he played on the football team as he was over six foot tall.

After high school, he began to study at the University of California, Berkeley, in 1927. He was awarded his Bachelor of Science in 1931 and his Ph.D. in 1933.

In 1941 he received a Guggenheim Fellowship and decided he would work at Princeton University. On 7th December 1941, the Japanese attacked Pearl Harbor. The day after, Libby volunteered his services to Harold Urey, who was working on the Manhattan Project.

The Manhattan Project was where scientists, physicists, and others were working to develop a functional atomic bomb for the war-time effort.

For the next three years, Willard Frank Libby and his team worked on being able to separate uranium-235 from uranium-238 as atomic bombs required the uranium-235 which was only 0.7 percent of natural uranium. They continued to work, and between all the scientific staff, they were able to achieve the successful creation of the atomic bomb.

When the war was finished, the University of Chicago offered a professorship in the Chemistry Department to Libby, which he accepted. It was at the Institute for Nuclear Studies. Willard Frank Libby went back to his radioactivity studies, which he had been working on before the war.

Willard Frank Libby had come to the realization that when plants and animals die, they no longer took in fresh carbon, which in turn meant they had a nuclear clock built-in that could be read to find their age. He also built radiation detectors that were sensitive enough to read the carbon as given in his theory.

Willard Frank Libby’s theory was a revelation to industries that used carbon datings, such as archeology, and paleontology.

In 1950, he was appointed to the General Advisory Committee of the Atomic Energy Commission (AEC). In 1954, President Eisenhower appointed him as a Commissioner of the AEC. Upon his appointment, Willard Frank Libby moved his family to Washington, D.C. so he could take up his post. He established a laboratory for himself at the Carnegie Institution so he could continue his studies.

Willard Frank Libby was a conservative when it came to politics, and he was one of the few scientists that sided with Edward Teller when Teller and Oppenheimer were debating whether to continue a program on developing the hydrogen bomb.

In 1959, Willard Frank Libby resigned from the AEC so that he could take up the position of Professor of Chemistry at the University of California, Los Angeles (UCLA). He held the position until he retired in 1976.

In 1962, he was appointed Director of the University’s state-wide Institute of Geophysics and Planetary Physics (IGPP). This was a position he held until 1976.

In 1972, he established the first Environmental Engineering program at the University. He was a member of the California Air Resources Board and worked on improving the air pollution standards in California.

He published eight works on radiation, including radiocarbon dating, and radioactive fallout, between 1946 and 1972.

A ninth was published by his second wife, Leona, with Rainer Berger, in a seven-volume set in 1981, after his death.

Willard Frank Libby’s major work was his radiocarbon dating theory, which was a breakthrough for disciplines such as archeology and paleontology that use the method to assist in their work.

Willard Frank Libby had many awards and honors bestowed upon him. Some of the more notable are:

Willard Frank Libby married Leonor Hickey in 1940. She was a physical education teacher. In 1945, they had twin daughters, Janet, and Susan. Libby and Hickey divorced in 1966.

After his divorce, Willard Frank Libby married Leona Woods Marshall. She was a distinguished nuclear physicist and had been one of those responsible for building the world’s first nuclear reactor. In 1973, Marshall joined Libby at UCLA, taking up a professorship in Environmental Engineering.

Willard Frank Libby’s papers have been preserved in the Charles E. Young Research Library at the UCLA.