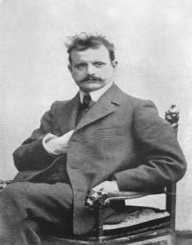 Jean Sibelius was a Finnish composer who is best known for being Finland’s foremost composer and being intrinsically linked to the country’s early national identity.

Sibelius was born in Hämeenlinna in the autonomous Grand Duchy of Finland a part of the Russian Empire on 8 December 1865. Sibelius’ parents were Christian Gustaf Sibelius and Maria Charlotta Sibelius. Sibelius’ father was a doctor but died in 1868 of typhoid leaving the family in debt. His mother sold the family home and moved back to her parent’s home. His mother and grandmother raised Sibelius. His most significant influence though was his uncle, Pehr. Pehr gave Sibelius a violin when he was ten years old and taught the young boy about music. As well as violin, Sibelius was taught piano by his aunt, Julia. Sibelius learned to read music and improvise his creations.

Sibelius attended Finnish language schools but did not enjoy his education. He did, however, discover Finnish mythology in school and this would have a major influence on his music. The epic, Kalevala, was of particular strong influence throughout his career. At home, Sibelius would perform with his siblings and composed his first piece in 1881. He also began receiving professional lessons for his favorite instrument, the violin. Upon completing school, Sibelius began studying law at the Imperial Alexander University and music at the Helsinki Music Institute. He quickly abandoned his legal studies to focus fulltime on music.

Sibelius wished to become a violin virtuoso but was told he had started too late to become a top violinist. Instead, he began to focus more on composing music. He composed over one hundred pieces with String Quartet in A minor being the best known of his chamber and instrumental compositions. Beethoven and Wagner also influenced Sibelius. He moved to Vienna for a year to study further and composed Scène de Ballet and Kullervo, the latter being inspired by Kalevala. Lemminkäinen Suite, a work created from an abandoned opera, brought Sibelius fame in Finland. He was required to work as a music teacher to supplement his income. His First Symphony made Sibelius a national hero due to the patriotic song, Song of the Athenians. National fervor was rising in Finland at the time as Russia was attempting to limit Finnish autonomy. Sibelius’ magnum opus, Finlandia, was deeply critical of Russian rule.

Sibelius wrote his Second Symphony in 1901 while traveling through Italy. As well as being a huge success in Finland, Sibelius also traveled around Europe conducting performances. Sibelius continued to draw from Kalevala for his works and released numerous works based on it. Sibelius completed his Third Symphony in 1907. His Fourth Symphony was published in 1911 and was not as warmly received as previous works. He continued to tour Europe during this time performing in Berlin, Oslo and other capital cities. He traveled to America in 1914 just before the outbreak of the First World War. The outbreak of war hit Sibelius’ finances as his ability to tour and collect royalties was greatly curbed.

Sibelius returned to Europe in 1915 and published his Fifth Symphony in Helsinki. The declaration of independence and the outbreak of the Finnish Civil War saw another surge in popularity for Sibelius’ work, in particular, his Jaeger March which was published in 1918. Sibelius’ health began to deteriorate at the start of the 1920s, and he began to drink excessively. In spite of his health, Sibelius published his Sixth Symphony in 1923 and his Seventh Symphony the following year. His health worsened, and he became dependent on alcohol for his nerves and pain. His last major work was a score for the Shakespeare plays The Tempest.

Sibelius was made granted a Knight Commander’s Cross of the Order of Dannebrog by the King of Denmark. His birthday is a national day of celebration in Finland as Music Day and Flag Day are celebrated. His old university was renamed the Sibelius Academy.

Sibelius married the daughter of the Governor of Vaasa General Alexander Jarnefelt. Sibelius and Aino were married in 1892. Together they had six children, all daughters, Eva, Ruth, Kirsti, Katarina, Margareta, and Heidi. They lived together on the shores of Lake Tuusula. Kristi died of typhoid in 1900 and this strained Sibelius and Aino’s relationship. Sibelius’ bouts of heavy drinking and excessive spending often led to disputes with his wife. One particular bad bout of drinking drove Aino to a breakdown, and Sibelius gave up drinking for twenty years. Sibelius underwent treatment for throat cancer in 1908. Sibelius died on 20 September 1957 of a brain hemorrhage.

Sibelius joined the Free Masons following Finnish independence and was a founding member of the first Finnish Masonic lodge. He was an organist for the lodge.