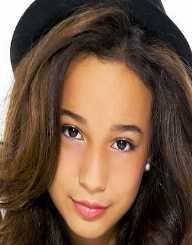 Social media has good bad and ugly, but when used for a good course, its advantages exceeds disadvantages. Many youths of today have picked on the good side of social media and have been making a career out of it. With the inception of social media platforms like YouTube, Instagram, Facebook, Twitter, Musical.ly, snapshot among the others, many talents are discovered each and every day, and Erica Delsman has been one of such young chap making good use of social media. Born on July 26, 2004, Erica Delsman has become an instant star on Musical.ly with her outstanding uploads. She has gained the attention of many musers, and her fan base keeps increasing every minute. Erica has been able to maintain her great attractions on the app with her music and comedic videos. She has more than 500,000 fans on musical.ly, almost 6000 subscribers for his YouTube channel and visible on Instagram and Twitter.

Erica Delsman was born on July 26, 2004, in Wisconsin, United States of America. She has three sisters, two brothers, and other four step-siblings but her parents are divorced. Erica is a fan of sports and very active in gymnastics and playing basketball. There is not much information about his family and her childhood life. Erica was diagnosed with Scoliosis in 2010.

Just like her colleague social media star, Erica started her social media journey with the first post in 2015 on Musical.ly. This worked like a magic, and she has since amassed a sizable number of fans on that platform. Erica does original contents, which is hilarious but has an inspirational side, which is found very attractive to her fans. She has able to heighten her videos as she is featured several times. This has increased her fan base and currently has more than 500,000 fans in Musical.ly. Erica has also collaborated with others musers for their videos.

Erica is also visible on other social media platforms like YouTube, Twitter, and Instagram. Just like other teens using social media, Erica has suffered some abuse online. This has also affected her studies in some way and has admitted this on her YouTube channel. According to her, she is not able to concentrate on her education due to her intense social media presence and announced she would lessen that for her own good. Erica became a brand ambassador for the app WavVid.