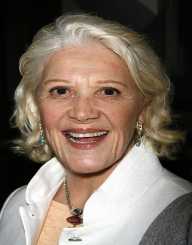 Linda Lavin is an American actress and singer, best known for her role in the sitcom Alice.

Linda Lavin was born in the city of Portland, Maine, on October 15, 1937. Her father, David, was a businessman. Her mother, Lucille, was an opera singer. She graduated from the private Waynflete School. She then enrolled at the College of William and Mary in Williamsburg, Virginia. She graduated with a degree in theater.

After graduation, Linda Lavin moved to New York City. She made her Broadway debut in 1962 with the play A Family Affair. She continued to sing and act in different musicals and plays. She also took part in many Off-Broadway productions, such as the revue Wet Paint and the musical Little Murders. She received critical acclaim for her role in It’s a Bird… It’s a Plane… It’s Superman in 1966. Four years later, she got her first Tony nomination for Last of the Red Hot Lovers.

In 1967, Lavin appeared into the television version of the musical comedy Damn Yankees. A few years later, she moved to Hollywood. She had small roles in several television movies and shows, such as Jerry, The Morning After, The Nurses, and many others. She got her first recurring role on the sitcom Barney Miller. She played a detective named Janice Wentworth.

In 1976, Linda Lavin got the lead role in the sitcom Alice. The show was based on the film Alice Doesn’t Live Here Anymore. It tells the story of a widow who lives with her young son and works in a diner in Arizona. The series aired on CBS, and it became very popular. It ran for nine seasons. Lavin earned two Golden Globe Awards and an Emmy Award nomination. Apart from acting, she also directed some episodes in the last few seasons of the show.

After Alice, Linda Lavin appeared in numerous television shows. She was a guest star on popular shows such as The Muppet Show, Law & Order, The Sopranos, and Bones. She was also in the regular cast of the sitcoms 9JKL, Conrad Bloom, Sean Saves the World, and Room for Two. She also appeared in many television films such as Like Me, Another Woman’s Child, The Ring, Best Friends for Life, and many others. She produced the telefilm A Matter of Life and Death in 1981. She directed the telefilm Flour Babies in 1990.

Lavin made her big-screen debut in 1984 in the film The Muppets Take Manhattan. She then starred in See You in the Morning, and I Want to Go Home in 1989. In 2010, she was a part of The Back-up Plan.

Linda Lavin also continued to appear in stage productions. In 1987, she won a Tony Award for her role in Broadway Bound. She played the role of Kate, a mother, and wife whose husband is having an affair. She continued in different plays, such as Gypsy, The Sisters Rosensweig, Elaine May, The Lyons, and others. One of her most famous roles was in the stage adaptation of The Diary of Anne Frank, where she starred together with Natalie Portman. Overall, Lavin’s theater work earned her four more Tony nominations, two Drama Desk Awards, and two Obie Awards.

Apart from acting, Lavin also sang. She appeared in concerts and cabaret performances. She performed in the Empire Plush Room in San Francisco, and in the Birdland club in New York. In 2012, she performed together with the Wilmington Symphony in North Carolina. The same year, she released her recording called Possibilities.

Linda Lavin was married to actor Ron Leibman from 1969 to 1981. A year after their divorce, she married Kip Niven. That marriage lasted ten years. In 2005, she married artist Steve Bakunas. She has no biological children, but she is the stepmother of her husband’s offspring.