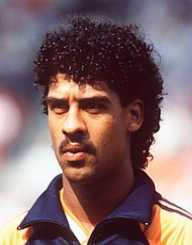 Frank Rijkaard was a Dutch footballer and football coach who is best known for being part of the great 1995 Ajax team and managing Barcelona to victory in the 2006 Champions League final.

Frank Rijkaard was born in Amsterdam, the Netherlands on 30 September 1962. His father, Herman Rijkaard, was a footballer in Suriname who later immigrated to the Netherlands to play football there. There he married Neel, Rijkaard’s mother. Rijkaard followed in his father’s footsteps and was selected for the first team of Dutch giants, Ajax, at the age of seventeen.


Career As A Player

Frank Rijkaard played his first league game for Ajax in 1980, lining out against the Go Ahead Eagles and scoring a goal. Rijkaard played twenty-three of Ajax’s thirty-four games that season as they finished second in the Eredivisie. During 1981 Rijkaard received his first international call-up for the Netherlands against Switzerland. The following year Rijkaard played twenty-seven times and scored five goals as he helped Ajax to the league title. The following year Rijkaard enjoyed even greater success with Ajax. The club won the league and cup double, and Rijkaard made thirty-three appearances in which he scored four goals. The 1983-84 season proved disappointing as Ajax failed to retain either of their domestic titles and crashed out in the first round of the European Cup.

Rijkaard did enjoy one of his most prolific seasons though as he scored ten goals in twenty-seven appearances. The following year Ajax regained the Dutch league, and Rijkaard played forty-one times in all competitions. The next year saw Ajax and Dutch legend Johan Cruyff takeover as manager of the club. Despite Cruyff’s implementation of total football and the great attacking style, his Ajax team failed to win the league during his three years in charge. He did, however, win two Dutch cups. The crowning achievement came in 1987 as the Ajax team won the European Cup Winners’ Cup. Rijkaard played center-half for the victorious team which also featured the free-scoring Marco van Basten and a young Dennis Bergkamp.

Rijkaard had a training ground dispute with Cruyff during the 1987-88 season and moved to Sporting Club de Portugal. However, his stay was short-lived as he was unable to register to play in Portugal and instead was loaned out to Real Zaragoza in Spain. He would never line out for his Portuguese parent club as he was sold to A.C. Milan in 1988. What followed was the most successful part of Rijkaard’s career. At Milan, he was joining fellow Dutch players, Marco van Basten and Ruud Gullit. Before playing together at A.C, the three were part of the Dutch team that won the 1988 European Championships. Van Basten was the tournament’s top scorer.

Rijkaard partnered Ronald Koeman at center half. The Dutch team defeated the Republic of Ireland and England in the group stages before dispatching West Germany in the semi-finals. Gullit and van Basten scored the goals in the final as the Netherlands defeated the Soviet Union to win their first major international title. Rijkaard played forty-seven times for Milan in his first season there, helping them to a European Cup victory. The club retained the title the following year but was thwarted in the quest for a treble as they finished runners-up in both the Italian league and cup. The 1990-91 season saw Milan fail to win a single major trophy and they were banned from European competitions for unsporting behavior. Rijkaard won his first Serie A title in 1992 as Milan lifted the league trophy.

Rijkaard and the club would again win the league in 1993 but missed out on a third European Cup/Champions League in five years as they lost to Marseilles in the final. Rijkaard returned to Ajax in 1993 and formed a defensive partnership with Danny Blind. His first year back saw Rijkaard win a fourth Dutch league title. Rijkaard scored eleven goals in forty-one games for the club. The next year Rijkaard helped Ajax go the domestic league season unbeaten, clinching the title, and claim the 1995 Champions League. The final marked Rijkaard’s last game as a player as he retired. He had played five hundred and forty club games scoring ninety-eight goals during his career. His international record stands at seventy-three appearances and ten goals.

Frank Rijkaard moved into coaching and worked as an assistant to Guus Hiddink during his tenure of the Dutch national team. Rijkaard was given the Dutch management job in 1998. Rijkaard guided his team to four wins at Euro 2000, defeating eventual winners France in the group stages. However, they were eliminated in the semi-finals on penalties by Italy. After the defeat Rijkaard resigned. Rijkaard’s first club management role was with Sparta Rotterdam and proved to be a disaster. The club was relegated in Rijkaard’s first season, and he was sacked.

In 2003, Rijkaard landed the job that made his name as a manager. Fans of the club did not warmly receive his takeover of Barcelona. The clubs arch rivals, Real Madrid, had developed a superstar team and Barcelona had a poor start under Rijkaard. Despite this, he steadied the ship and finished runners-up in the league in his first season. Rijkaard set about building his team around Ronaldinho, adding Deco and Eto’o as well as introducing academy product Iniesta to the team. 2004-05 saw Barcelona win their first major trophy in six years as they won La Liga. The following year they performed even better, retaining La Liga and winning the Champions League. In the Champions League final Rijkaard turned the game with three second-half substitutions, bringing on, Iniesta, Belletti, and Larsson.

Rijkaard failed to win another major trophy with the club and left at the end of the 2007-08 season. Rijkaard’s tenure marked a turn in the history of Barcelona as they overcame the star-studded Real Madrid team and won their second Champions League. Rijkaard also oversaw the introduction of the youth products that form the base for the Barcelona team for a decade to the squad. Rijkaard would never again enjoy success in management. He went to Turkish club Galatasaray in 2009 but was sacked after just over a year in charge. Rijkaard began managing the Saudi Arabian national team in 2011, but failed to qualify for a major tournament and was dismissed in 2013.

Frank Rijkaard married Carmen Sanders in 1985, and the couple had a daughter together, Lindsay. The marriage ended in divorce. He had a son, Mitchel, with his second wife, Monique Olgers. His second marriage also ended in divorce. Rijkaard also has two children, Santi and Ceejay, with current wife and former nanny to his children, Stefanie Rucker.

Rijkaard earned the nickname, ‘The Llama’, for spitting at German player, Rudi Voller, at the 1990 World Cup.