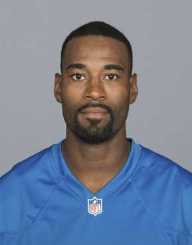 American footballer Calvin Johnson, Jr. was born on the 29 September 1985 in Newnan, Georgia in the United States.

Calvin Johnson was educated at Sandy Creek High School, Tyrone, Georgia before enrolling at Georgia Institute of Technology. He played college football and his exceptional talent as a footballer was recognized.

In 2004 Calvin Johnson was selected for the first team for the All-Atlantic Coast Conference and was the leading receiver. In his sophomore year, 2005, he won first-team All-American honors. He earned it again in 2006 and was also a semi-finalist for the Fred Biletnikoff award. Johnson’s college record for receiving yards is 2,927.

He is a practicing Christian.

Post-retirement Calvin Johnson has worked on a water sanitation project in Bolivia.