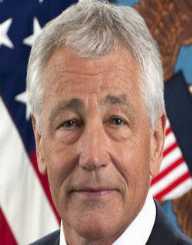 Chuck Hagel was an American politician who is also a decorated war veteran and served in the Vietnam War. He was also the founder of a telecommunications company called the Vanguard Cellular which was acquired by At& T Wireless in 1999.

Chuck Hagel married twice in his life. His first marriage was to Patricia Lloyd in 1979, but their marriage did not last long. Soon after the couple separated in 1981 and their divorce was legalized a year later in 1982. Hagel married his second wife Lilibet Ziller in 1985 of who bore him two children:  a daughter named Allyn and son Ziller where they currently reside in their Virginia home.

Born on October 4, 1946, as Charles Timothy Hagel in North Platte, Nebraska, his parents were Elizabeth Dunn and Charles Dean Hagel. He was the eldest of four siblings and attended St. Bonaventure High School which is now known as Scouts Central Catholic High School and upon graduation enrolled at Brown Institute for Radio and Television in 1966. He also attended Omaha’s University of Nebraska where he attained his bachelor’s degree in history on 1971.

The Vietnam War reached its peak during his college and Hagel volunteered to render service for the US Army where he served in the infantry from 1967 to 1968. He served alongside his younger brother in the same infantry and even saved each other’s lives in separate occasions. Upon discharge, Hagel received two Purple Hearts, the Combat Infantryman Badge, the Vietnamese Cross of Gallantry, and the Army Commendation Medal for his service in the military.

When he finished his service in the army, Chuck Hagel pursued his interest in the radio and television industry by working as a radio newscaster and TV host in Omaha for two years starting from 1969 to 1971. While he was working, he took up his college education with the help of GI Bill at the Veterans Administration.

Chuck Hagel made his entry into politics in 1971 when he was hired as a staff member for US Congressman John Y. McCollister for six years until 1977 where he worked his way up as chief of staff. He was involved with future president Ronald Reagan’s presidential campaign. When Reagan won, he appointed Hagel as the Veteran Administrations Deputy Administrator in 1981 but resigned soon after the following year in 1982 after a dispute with Robert P. Nimmo.

In 1996, he entered the US Senatorial Campaign where he won the seat at the Senate in Nebraska. He ran and was re-elected for a second term in 2002 with a whopping 83 percent of the vote. It was also during his second term when the 9/11 incident took place under then-president George Bush’s administration. Initially, he was in favor of the authorization of necessary military force in Afghanistan but later supported the legislation of withdrawing the troops from Iraq.

Chuck Hagel was appointed as Secretary of Defense by President-elect Barack Obama on January 2013 which the Senate confirmed a month later but resigned the position on November 2014.