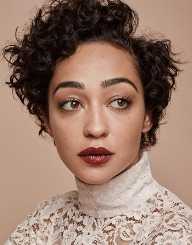 Irish- Ethiopian actress and producer, Ruth Negga crops up with great admiration. Her role as Mary in Isolation and Raina in Agents of Shield has flourished her career. Her major appearances include films like Warcraft, Misfits, World War Z, Noble, and Secret State. In all, fame and glory isn’t her primary goal in entertainment. There’s more than what meets the eye for Ruth.

Charming, hardworking and loving are some of Negga’s characters. Ruth Negga speaks with great enthusiasm that everyone thirsts to hear her uttering words. All of the said traits are great, but getting back to business is her greatest achievement. She loves to take a new role with novel experience for fear of impersonating traditional styles.

Her accomplishments are admirably reflected via loads of awards and different supporting characters. Negga prefers to evade a depressive mood, by trying to keep herself at ease.

Ruth Negga has had an unpredictable childhood life since she was born on 7 January 1982 in Addis Ababa, Ethiopia. She was taken to an Ethiopian born father, Negga and her mother, Norra was an Irish native.

Growing up as the only child, she spent her formative years in Ireland. It was there that she attended Trinity College and completed with a BA in the acting industry. Before then, her dad had already died in a tragic car accident when she was about to celebrate her eighth birthday.

Ruth relocated to London in her twenties where she honed her acting skills. In the processes, she impersonated Ophelia, a fictional character at the National Theatre.

It all started in 2004 where Ruth Negga took a leading role in an Irish film titled Capital Letters. In 2005 she played as Mary in Isolation movie. With the help of a film director, Neil Jordan Ruth took another turn where she was seen in his famous film called Breakfast on Pluto.

Still, in 2005, she appeared in Color Me Kubrick in partnership with John Malkovich. As a star in the making, other incredible films followed. Some of the major ones include Stars, 3 minute 4-play, The Four Horseman. Television roles that she has played include Criminal Justice, Doctors, and Loving Is the Drug and ABC’s Marvel’s Agents of S.H.I.E.L.D.

For two seasons Ruth Negga played as Rosie in Love/Hate television series. In 2011 she materialized as Dame Shirley Bassey in BBC production. Ruth also does voice acting as it was seen and heard in the Dark Soul II movie.

Negga’s work in BBC’s biographical film as Shirley Bassey and Doctors garnered her IFTA Award.  An Academy Award and Golden Globe Award followed for her incredible role in Loving. From 2013 to 2016, Negga has taken countable of prime projects including 2013 Twelve Years s Slave, Warcraft in 2016 as well as World War Z in 2013.

As of April 2010, Ruth Negga dated Dominic Copper with whom she works with Phrede and Warcraft films. Sources claim that they recently broke up but still working together. At 37 years of age, Ruth still has more to offer than just acting.