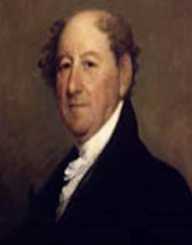 Rufus King was born 24th March 1755, to Richard and Isabella King. He was born in Scarborough, Massachusetts, in British America, now in the state of Maine. His father was a successful businessman. He was a merchant, farmer, lumberman and sea captain. Richard had made a fortune by 1755, which made many of his neighbors jealous, and in 1765 when the Stamp Act was invoked, their house was looted, and most of the furniture destroyed when rioting took place.

King studied at Dummer Academy, and then went on to Harvard College, from where he graduated in 1777. In 1778 he left his study to volunteer for militia duty in the American Revolutionary War. He returned to his study afterwards, and in 1780 he was admitted to the bar.

After being admitted to the bar, Rufus King started his legal practice in Newburyport, Massachusetts. In 1783, he was elected to the Massachusetts General Court and remained there for two years. From 1784 to 1787, he attended the Confederation Congress on behalf of Massachusetts.

He worked with the likes of William Samuel Johnson, James Madison, Gouverneur Morris, and Alexander Hamilton in preparing a final draft of the United States Constitution. The constitution was signed on 17th September, and each state was required to sign it.

After returning home to Massachusetts, Rufus King got the support of the merchants and politicians, and Massachusetts became the sixth state to ratify and sign the constitution. He had enjoyed his political experience working at the Constitution Convention to such an extent, that he closed his legal practice in 1788, and moved to Gotham in New York to join the political arena.

Shortly after, encouraged by Hamilton, he moved to New York City. He was elected to the New York State Assembly in 1789. He was then elected as Senator from New York. In 1795, he was re-elected, but in 1796 he resigned to become U.S. Minister to Great Britain, appointed by George Washington. In 1803 when Thomas Jefferson was president, King’s position was not renewed.

Rufus King returned to local politics, but he had no success over the next few years. He continued to try and ran for Governor of New York in 1816 but lost. The Federalists were falling apart by this time, but King still ran for the presidential nominee on the Federalists ticket. When the Democratic Republicans split, it left a vacant seat on the Senate. Both factions supported King, however, so he took the position in April 1820 and served in the Senate until March 1825.

He continued his opposition to slavery and gave an impassioned speech as to why Missouri, as a slave state, should not be admitted. When John Quincy Adams won the Presidency, King was once again offered the position of Minister to Great Britain. After only a few months he had to return home as his health was failing. Shortly after, he retired from public life.

In 1906, they were donated to the New York Historical Society, and most of them are still there.

Awards, Honors, and Other Business

1805: Elected a Fellow of the American Academy of Arts and Sciences

1814: Elected a member of the American Antiquarian Society

King was also a Director of the First Bank of the United States.

In 1786, Rufus King married Mary Alsop. She came from a prominent family in New York, with her father being a successful merchant. The couple had seven children, five of whom survived to adulthood.

The home he bought in 1805, called King Manor, has now become a museum and is open to the public. It is situated in King Park in Queens.