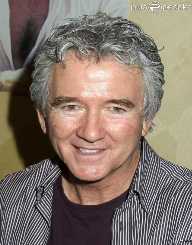 Patrick Duffy was born on March 17, 1949. He is an American actor. He is known for his role in the soap opera ‘Dallas.’

Patrick Duffy was born on March 17, 1949, in Montana. He was born to Marie and Terence Duffy. His parents were tavern owners. He attended Cascade High School. He later attended the University of Washington. In 1971, he graduated from the university with a Degree in Drama. While he was in college, he ruptured his vocal cords. He taught mime and movement classes at this time. He was also an interpreter for ballet, orchestra and opera companies in Washington DC.

In 1977, Patrick Duffy starred in the series ‘Man from Atlantis.’ In 1978, the series was cancelled. He later got the role of Bobby Ewing in the soap opera ‘Dallas.’ He appeared in the soap opera alongside Larry Hagman and Barbara Bel Geddes. The soap opera became a success and so he gained much popularity. In 1985, he left the series. In 1986, he returned to ‘Dallas’ where he remained until 1991.

In 1983, Patrick Duffy sang the duet ‘Together We’re Strong’ with French singer Mireille Mathieu. In 1991, he starred in the family sitcom ‘Step by Step’ alongside Suzanne Somers. The series ran until 1998. He directed some of the episodes in the series. He also appeared in the movies ‘J. R Returns’ and ‘War of the Ewings’.

In 2004, Patrick Duffy starred in the television .special ‘Dallas Reunion: Return of Southfork.’ He also lent his voice to films such as ‘Justice League’, ‘Family Guy’ and ‘Touched by an Angel’. He also appeared in movies such as ‘Falling in Love with the Girl Next Door’ and ‘Desolation Canyon’. In 2006, he appeared in the soap opera ‘The Bold and the Beautiful’. In 2008, he hosted the game show ‘Bingo America’. In 2012, he appeared in the remake of ‘Dallas’. The series ran up to 2014. In 2016, he appeared in the documentary ‘Hotel Dallas’ directed by Ungur and Huang.

In 1974, Patrick Duffy married Carlyn Rosser, a professional ballerina. They had two children together, Terence and Conor. In 2017, his wife died.  He is currently sixty eight years old. He has four grandchildren.