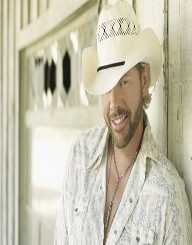 Toby Keith lived a decent life till when he came to find his way to the music industry in the 1990s.In the mid of 1993, he released his debut song titled should’ve been a Cowboy. At the age of eight, he received his first guitar where he started to learn different tones. In his teenage life, Toby spent his childhood life on their farm. It was here that he got interested in country music as well as rodeo skills. Besides Keith are also a renowned actor, producer, and songwriter. But Keith didn’t rise to fame as he expected, he took more time in writing and touring different places. His hard work made him achieve the unachievable. Read further to understand more about his early and later life.

Toby Keith comes with a charming smile and 6’ 3” height that is visible even to the unknown. He likes to cover his head with a cowboy hat that speaks his love for country music. His emotions typically fabricate Toby's world. He hates to struggle or sense on what other people are thinking and feeling.In that case, he likes to rely on his intuitions. Also, he loves freedom just as much as he loves to meet new people. Travel and adventure are his best hobbies. He also loves to do several things at a go, but he hates to concentrate on one thing for a long time. His world revolves around regular routines, courage, and adaptability. With his out of world persona, Toby attracts all kind of people. He seems to have a way to play with words as well as motivating others on the way. This gives him a chance to have successful endeavors. He also likes to efficiently communicate just as much as he likes to understand other people’s perspectives.

On July 8, 1961, Toby Keith Covel was born in Clinton, Oklahoma, in the U.S. to Carolyn and Hubert Covel. He spent his childhood days in Oklahoma City where he started to learn how to play musical instruments. He was inspired to venture into the music industry by the band that worked at his grandmother’s club. Keith joined Moore High School where he participated in football field as a defense. He also served in an oil industry after his studies. After graduation, he created his band, and this is where he began to tour to different clubs and local towns.
At that time, Oklahoma City was quite far from the music genre. For this reason, it took some time for Toby’s songs to reach the right target. However, one of the renowned producers, Harold Shedd heard about his songs. It was here that he got an opportunity to meet with him and his potential continues to climb the ladder.

Under the guidance of Harold, Toby came up with his first single titled should’ve been a Cowboy in 1993.The song turned out to be the town’s anthem where it rocketed to number one on the charts. This gave him more energy to come with more resounding songs such as Wish I Didn’t Know Now and HeAin’t worth Missing. The songs gave Toby a chance to knock the door of success.

Keith also showcased his interest as a writer. It was in the middle of 1995 that he penned a song titled Boomtown that cemented number one. After a short pause, he followed it up with whose That Man single. In 1996 he came up with another single titled Me Too and A Woman’s Touch. Although he had received immense recognition from his fans, he continued to hunger for a unique style.

Toby Keith signed a contract with Counter label where he released an album titled How Do You Like Me Now in 2009.The song turned into a remarkable hit for some weeks. Afterward, he followed it up with ‘You Shouldn’t Kiss like This’ which gave him resounding awards.

In 2001 Toby Keith released another album titled Pull My Chain that features songs like I Wanna Talk About Me, My List and I’m Just Talking About Tonight. Toby rose to fame when he launched a song titled Courtesy of the Red, White, and Blue in 2002.This signed him into the world of fame. With his next hits including Who's Your Dad and Beer for my Horses, Toby came up with a bombastic album titled Shockin' Y’all. He followed it up with a Patriotic album All American followed by This Bar and Whiskey Girl. Some of the renowned country music singers such as Kenny Chesney and Brad Paisley brought Tody’s songs into the limelight.

Keith continued to release more songs with the help of Kenny and Brad. It was here that he toured several Universities where he released songs like White Trash with Money and Ain’t As Good as I Once Was. In the process, he also came to produce his albums.

From 2008 to 2009 Toby Keith toured several places including Houston where he drew over sixty thousands fans. Toby is now known as one of the biggest singers that’s why his tickets are forever in demand. In 2017 Toby signed a contract where he went to perform at President Donald Trump inauguration. In 1984 Keith married his longtime partner and friend, Tricia Lucus. The couple was blessed with two daughters: Krystal Keith and Shelley Covel and a son called Stelen Keith. With Keith’s inspiring and upbeat personality he has drastically shown that he is a multi-talented person. In all, focus and discipline are right locks for his stardom.