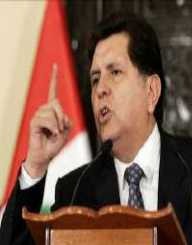 Alan Garcia was born on 23rd May 1949, to Carlos Garcia Ronceros, and Nytha Perez Rojas. He was born in Lima, Peru, in the Barranco District. The family was middle-class and politically active. Alan  Garcia didn’t meet his father until he was five, due to his father being in prison for being a member of the Peruvian Aprista Party (APRA).

As a youngster, Alan  Garcia would attend Party meetings with his father.

He went on to study law. He started at the Pontifical Catholic University of Peru but then graduated in 1971 from the National University of San Marcos. Alan  Garcia then went to Spain to study for his Ph.D. in law, and despite Alan  Garcia claiming he graduated with a Ph.D., documentation later showed that he never graduated.

In 1974, Alan  Garcia went with other members of the APRA, to study in France. They studied at the University of Paris, and he graduated with his Degree in Sociology.

Alan  Garcia officially took office as the President on 28 July 1985. It was the first time the APRA party had taken power in Peru’s history. Alan  Garcia was only 36 years old. Unfortunately, his tenure as president was not a very good one. The country had hyperinflation over the five years Alan  Garcia was in power. When he started his presidential term, 41% of Peruvians lived in poverty. In 1991, this had increased to 55%. A rebel movement called the Shining Path arose during the economic uncertainty. They were a violent group, and attacked electrical towers, causing blackouts. Garcia’s administration tried to combat the rebels, without success. They were accused of committing human rights violations, and are still being investigated for this.

Alan  Garcia made some disastrous decisions, and it is believed this contributed to Alberto Fujimori becoming so popular, even though he was an authoritarian leader. During Fujimori’s reign, Alan  Garcia lived overseas. He had been accused of corruption during his time in government. He moved to Columbia in 1992, and then on to France. In 2001, Garcia’s lawyer successfully represented him in court. All charges were denied by Garcia, and the court ruled that the statute of limitations had expired. Garcia was allowed to return to Peru.

Alan  Garcia decided to run for another term as President. He launched his campaign in February 2005, and successfully took the office of President of Peru in July 2006. Upon his second term win, Alan  Garcia tried to introduce the death penalty. He cited punishment for Shining Path rebels that had been captured. Congress voted the proposal down. Alan  Garcia tried to have a national referendum on the issue, but this, too, was blocked by Congress. This was followed by violence when Garcia ordered Amazonian Indigenous people to stop protesting and blocking roads in the Bagua region. Alan  Garcia had signed decrees that gave permission for foreign companies to come in and drill for oil, to do logging, and also mining. The environmental damage was significant. Over 100 of the indigenous protestors were killed by the military.

In 2015, Alan  Garcia launched his third presidential campaign, but he was soundly beaten in the exit polls, and he pulled out of the race. Alan  Garcia wrote many books over the years, mostly on his perception of Peruvian life and Latin America. Most of his books can be found in the National Library of Peru.

Alan  Garcia married Pilar Nores in 1983. She was an economist, and they met during a seminar in Madrid. The couple divorced in 2010.

Garcia’s earlier marriage was to Carla Buscaglia, a well-known actress. They were married from 1973 to 1980.

Alan  Garcia has four children, three daughters, and a son.

Unfortunately, Garcia’s terms as President of Peru will most likely not be remembered fondly. Causing hyperinflation, isolation from the International Monetary Fund, civil unrest and violence, and the shadow of human rights violations hanging over his head.