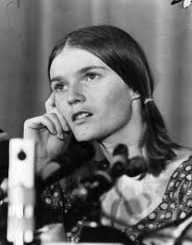 Linda Darlene Kasabian was born on June 21, 1949. She was once a member of Charles Manson’s Family. She was the chief witness at the prosecution of Manson and his followers for the Tate LaBianca murders. She was a witness for the District Attorney, Vincent Bugliosi. She is currently sixty nine years old.

Linda Darlene Kasabian was born on June 21, 1949, in Biddeford in Maine in the United States of America. She was born to Rosaire Drouin and Joyce Taylor. When she was still young, her father abandoned the family due to financial problems. Her mother took care of her and her siblings after that. Linda was an intelligent kid growing up, but she is always described as a romantic.

When she was sixteen, she dropped out of high school and ran away from home since she has problems with her stepfather, Jake Byrd. A short while after she ran away from home, she got married to Robert Peasley, but the marriage did not last. She later tried reconnecting with her father by moving to Miami. The reconnection did not happen, and she was left on her own.

Linda Kasabian later moved to Boston where she got married again to Robert Kasabian. In 1968, she gave birth to a daughter. Her marriage had a lot of problems, so she moved with her daughter to New Hampshire to live with her mother. She later moved back to Los Angeles where she reunited with Robert. They lived in the Los Angeles Hippie Hangouts of Topanga Canyon.

Linda Kasabian got pregnant with her second child, but Robert left her alone to go on a sailing trip to South America. At that point, Linda felt rejected and alone. In 1969, she went with Catherine Share, Melton’s friend, to the Spahn Ranch in Chatsworth in Los Angeles, California. At the ranch, she met Manson. She went to the farm with her daughter Tanya and met people who promised her that her life would change for the better.

During her first night at the ranch, she met and slept with one of the Manson followers, Charles ‘Tex’ Watson.  Watson later convinced her to steal money from Charles Melton. Later on, she was introduced into to Manson who looked good according to her eyes having on his buckskin clothing. That night she had sex with Manson in a Spahn Ranch cave. In her mind, she thought that Manson understood her better than every other person in her life who deemed her disposable.

Linda Kasabian joined the activities of the Manson family by stealing from residents in Los Angeles and involving herself in other criminal activities. In 1969, Linda was instructed to take her driver’s license since she was the only one with a valid license, a change of clothing and a knife to accompany members of the Family to a crime scene.

The members of the family, who were being accompanied, included Charles ‘Tex’ Watson, Susan Atkins and Patricia Krenwinkel. Linda took them to the residence of Roman Polanski who is a film director and his wife, Sharon Tate. She witnessed Charles shooting to death Steven Parent who was a youth who had come to visit the caretaker.

Linda Kasabian was instructed to remain outside while the rest of the crew went into the house and murdered Abigail Folger, Sharon Tate, Jay Sebring, and Wojciech Frykowski. Sharon was eight months pregnant when she was killed.  Linda wanted to drive away to get some help and report the shootings but was afraid for her daughter whom she had left at the Spahn Ranch.

The following night the group together with Steve Grogan and Leslie Van Houten left the ranch for LaBianca’s residence in Los Feliz. Upon arrival at the house, Matson, Krenwinkel and Van Houten killed Leno and Rosemary LaBianca. Linda was forced to go out this night even though she did not want to go. All these facts she answered to at the trial for both murders. Two days after the killings took place; she hid and ran away from the Manson family to New Hampshire.

The Manson family was later raided and some members arrested after a car theft. Linda Kasabian was informed that a warrant of arrest had been issued against her and so she turned herself into New Hampshire authorities. She was offered immunity, and in turn, she agreed to give the state evidence to convict the Manson family of the murders of Tate and LaBianca.

She became the chief witness for the prosecution even though some people considered her an accomplice to murder. She testified for a total of eighteen days. In 1971, the defendants were found guilty of the murders by the trial jury.

After the trial, Linda Kasabian went back to New Hampshire with her children and husband to live peacefully from all media coverage. She worked as a cook for some time, and in 1971 she was called back to Los Angeles to testify against Tex Watson.

In 1977, she testified against Leslie Van Houten. Later on, her marriage went down the rocks, and she got divorced. Linda was found guilty as the years went by of numerous traffic violations. She was later on involved in a car accident that left her partially disabled.

After her divorce, Linda Kasabian remarried after some time. She is currently sixty nine years old.