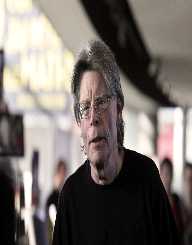 Stephen King is an award-winning writer of horror and suspense novels.  His fiction work has ranked high, and many have become box-office hit films and television series.

Stephen King was born on September 21, 1947, in Portland, Maine.  Stephen King was two years old when his father left the family, so his mother raised him and his brother. Some of his childhood was spent in Fort Wayne, Indiana and Stratford, Connecticut.  Eventually, they returned to Maine to be closer to his maternal grandparents.

His love for books started at a young age.  As a little boy he enjoyed reading comic books, but he also had a strong interest in horror books back then as well.  Stephen King was a fan of another author from the New England area.  H.P. Lovecraft is known for fictional horror stories such as “Call of Cthulhu” and an inspiration to King.

Stephen King was qualified to teach at the high school level, but there were few jobs available for him at that time.  For the first year after college, Stephen King worked as a laborer.  Early in his adulthood, King was a teacher. One of his first jobs was at the Hampden Academy in 1971.  Throughout those early years, Stephen King wrote nights and weekends.

Stephen King sold short stories to men's magazines before his first novel, Carrie was published in 1973.  After that, he was able to quit teaching and write full time.

After the success of Carrie, Stephen King produced other popular novels from 1975 to 1986 including Salem's Lot, Cujo, and IT.  Not all of King's books were published under his real name.  Books like Rage, Roadwork, and The Running Man were written under the pen name Richard Bachman.

Stephen King was worried that public opinion would not be so received if an author published too many books at once.

Stephen King's dedication to writing meant that he was able to publish many books during his career.  However, those stories inspired their adaptations for movies and TV.  The Shining which starred Jack Nicholson and Shelley Duvall has become one of the top horror movie thrillers for over 30 years. Misery earned Kathy Bates an Academy Award for best actress in 1990.  Other movies inspired one of his many stories have received nominations and awards including The Shawshank Redemption

Stephen King can add acting to his list of careers.  Stephen King has been known to make a cameo appearance in some of his films.  Another job title is a director.  In 1985, Stephen King was the screenplay writer and director for the movie Maximum Overdrive.

Stephen King continues to write.  This was true when he was in an accident.  In 1999 he was his by a truck.  Even though his hip was broken and his lung was punctured, Stephen King convalesced while writing seven days a week.

Stephen King and his wife have homes in Maine, but they also stay in Florida during the winter months.

Stephen King married his college sweetheart and fellow writer Tabitha in 1971.  They have three children.  Over the years, the Kings have lived in Maine, Colorado, England, and Florida.  Some of his novels are set in these previous residences.

Stephen King and his wife have established scholarships for high school students in their area.

Stephen King is also a fan of music.  His pen name Richard Bachman was partially inspired by the group Bachman Turner Overdrive.  He sings and plays guitar for Rock Bottom Remainders.  This band of authors performs for charity fundraisers.

Stephen King has received international acclaim for his literary works.  Some of his awards and achievements include: