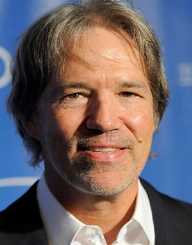 David E. Kelley is an American lawyer who became a television playwright and producer.

David Edward Kelley was born on April 4, 1956, in Waterville, Maine. He grew up in Belmont in Massachusetts. Kelley went to Belmont High School. He then enrolled at Princeton University. In 1979 he graduated in Political Science. In 1983 he earned a Jurist Doctor degree from the Boston University School of Law.

He was employed at a Boston legal firm, Fine and Ambrogne. He was in charge of real estate and petty crimes. Kelley was hired by Steven Bochco, a television producer who was searching for a legal editor. Bochco saw a film script which Kelley had written. He was impressed by the legal content. He offered Kelley an editing job for his television series L.A Law. Kelley took a sabbatical leave from the law firm to concentrate on editing the series.

In 1986, Kelley resigned from Fine and Ambrogne to become a full-time television playwright and producer. He relocated from Boston to Los Angeles to work as the editor of LA Law. When Bochco left to work with media house ABC, Kelley became the executive producer of the LA Law. The series was well received by viewers in the US. Kelley became a celebrity in the entertainment industry. After the success of LA Law, Kelley again worked with Bochco to produce Doogie Howser, MD. This was a story about a young medical practitioner which was aired on ABC.

In 1992 he left LA Law after over 8 years. He started working to produce another series Picket Fences. In 1992 the first episode of Picket Fences was aired on television. The series went on from 1992 to 1996. Kelley wrote the script for the first three years of the show. In 1994, he started working on yet another medical drama Chicago Hope. The show aired for six years, from 1994 to 2000.

In 1995 he started a contract to work with two television companies. He worked on two simultaneous productions. In 1997, he produced two television series The Practice, and Ally McBeal. The Practice was a legal drama set in the town of Boston. Kelley used the production to explore his legal experience. The Practice aired until its end in 2004. In Ally McBeal, he explored the legal fraternity cases with a touch of humor. The series was a comical drama. The program series ended in 2002.

In early 2000, Kelley worked on other projects. He had Boston Public and Boston Legal. In the former Kelley produced a comedy set in the city of Boston. The comedy revolved around the daily school life of a Boston high school fraternity. The show lasted from 2000 to 2004. From 2004 to 2008 he worked on Boston Legal.  Kelley was more professional on Boston Legal. He fused humor and law to produce a comic courtroom drama.

In 2011, he produced Harry’s Law. This production ended the following year. In 2013 he produced another series Crazy Ones which lasted until 2014. Apart from the long-term series, Kelley has written several other short television episodes. Notable examples are The Wedding Bells, Life On Mars, and Goliath.

For his work as a producer, Kelley has received many accolades. He has been nominated for the Emmy Awards 26 times. He won 11 of them.

He is a legal mind in the entertainment industry. Kelley has used his opportunity well to champion the rights of the underserved. He uses characters in his television series to bring about issues in the society. He discusses matters ranging from religion intolerance, education disparities, medical professionalism, to legal under-representation in court.

Kelley is married to Michelle Pfeiffer. They wedded on November 13, 1993. They have two children. The elder daughter Claudia was born in March 1993. Michelle adopted her before she got married. Their biological son John Henry was born in August 1994.

In his private time, Kelley is a sports fan. He played ice hockey in college where his father was the coach. Kelley still goes for ice hockey matches when his busy schedule allows him to.

Kelley has a unique trait in his productions. He blends humor with real-life issues. His audience connects well with the theme. He breaks down the motive that everyone understands what is happening in the cast. His legal knowledge has also helped in the production. Kelley is a professional. His television casts have no graphic episodes. Thus they attract viewership from across the spectrum.