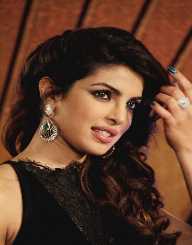 Priyanka Chopra is self-made Indian film actress, singer, and columnist who is highly rated among the most powerful, famous, attractive and influential Indian Celebrities. She is a high-profile celebrity and a style icon known for her distinctive physical features. In December 2016, she was nominated global UNICEF Goodwill Ambassador for her relentless efforts in Child Rights. In the same year, she was named “100 Most Influential People in the World” and the “eighth –highest –paid TV actress in the world” by Time and Forbes respectively.

Priyanka Chopra was born on July 18, 1982, in Jamshedpur, Bihar. Her parents are Ashok and Madhu Chopra, both being physicians and her mother being a professional gynecologist. Their occupation made them move several times. Therefore, Chopra had the opportunity to visit and live in Pune, Lucknow, Bareilly, Ambala, Ladakh, Chandigarh, and Delhi. Chopra has a brother seven years younger called Siddharth,

When Priyanka Chopra was 13 years, she moved to the US to stay with her aunt. She enrolled in school, and she studied in Newton, Massachusetts, Queens, New York and Cedar Rapids, Lowa. She loved dancing and registered for “Kathak dance,” where she indulged into choral singing and Western classical music.

After she stays in the States for three years, she returned to India and finished senior high-school education at Army Public School. She participated in a beauty pageant competition and won a local "May Queen" contest. Following this triumphant victory, her mother put her through the Femina Miss India contest (2002), and she finished second. This inspired her to audition for Miss World pageant, where she was crowned Miss World 2000.

“The Hero," a breathtaking story film marked Priyanka Chopra's debut in Bollywood movie in 2003. This movie was depicting a spy agent who fought against terrorism. The Hero became one of the most viewed Bollywood films in 2003 and received many reviews from critics. In the same year, she played as a vivacious lady who is genuinely attracted to Akshay Kumar's character. This movie Andaz revealed her potential as a star, and she won the Filmfare Award in the category for Best Female Debut. She also got nominated for Filmfare Award in the category for Best Supporting Actress.

Late in 2004, Priyanka Chopra starred in Abbas-Mustan's thriller called "Aitraaz." She was featured as an antagonist “Soniya Roy,” an ambitious woman employer who accused employees of sexual misconduct.  In fact, the Hindustan Times acknowledged it as the archor film that had a ripple effect on her career. She won an award for the Best Performance in a Negative Role. She was voted for both Filmfare Award as Best Supporting Actress and Producers Guild Film Award for Best Actress Supporting Role.

In 2006, Priyanka Chopra starred in a film that grossed US$17 million worldwide and attained the blockbuster status. This film was "Koi Mil Gaya" which was co-starring Naseeruddin Shah, a young man who was endowed with outstanding abilities which she eventually fell in love with the preceding scenes.

She also had a final release for 2006, which was a remake of 1978 action-thriller Farhan Akhtar's "Don.” In this film, she portrayed Roma who is depicted to have joined the underworld to avenge Don for murdering her brother. To fit this role Chopra was trained in martial- arts making her a “competent woman of action.” This movie received acclaim in India and overseas and was declared a successful box-office movie and grossed at US$16million.

Later Priyanka Chopra acted in the romantic comedy “What's Your Raashee?” - A story of an NRI US-based Gujarati who was sent to search for a soulmate. It involved searching for 12 girls with close linkage with the 12 zodiac signs. Chopra had to play all twelve girls in different settings. This film prompted consideration for her to be included in the “Guinness Book of World Records” for her exceptional performance portraying 12 distinct characters in a single film. This daunting performance was overwhelming for her, and she lost consciousness while filming and for some time was confined to a hospital bed.

In her final release of 2011, Priyanka Chopra played “Roma” in the second part of the movie “Don franchise,” known as “Don 2”. Her exceptional work got positive feedback from the audience. It had remarkably grossed to US$31 worldwide. Don 2 got a rare privilege and was showcased in the “62nd Berlin International film Festival” and “Don” at “International Film Festival of Marrakech” (2002) in Morocco.

In 2012, she performed in Karan Malhotra's which she co-starred with Rishi Kapoor and Hrithik Roshan, Sanjay Dutt. This was an action drama “Agneepath.” During production among the several accidents Priyanka's “Lehenga”; a traditional skirt caught fire while filming a festive song. “Agneepath” made a record open day earnings of US$ 29 million.

To Priyanka Chopra's great surprise “Planes” a Disney Animation Studio's production film was commercially grossed the estimated US $ 240 million globally. This was after lending her voice to the reigning Pan -Asian heroin with the character of “Ishani.”

Priyanka Chopra has also featured in a biological film called Mary Kom. This was a daunting venture, and she had to spend four months training in boxing. This effort yielded acclaim, and it was premiered in 2014 Toronto International Film Festival. Mary Kom was a big-time success and had an approximate gross of  1.04 billion (the US $ 15million) this made her win the Screen Award Best Actress, for the leading role she received the  Producers Guild Film Best Actress Award and a  nomination for Filmfare Best Actress Award.

Next, Priyanka Chopra was cast in an American series “Quantico” and a deal with the ABC Studios. Her character was “Alex Parrish,” in American series which was premiered on September 27, 2015. It was the first time for an Asian actress to win a People's Choice Award in An American new TV series for Favorite Actress.

"In My City” debuted as Priyanka Chopra's first single in US September 13, 2012, and in 12hours the same song debuted in India. In the same year, the single won Best International Debut as the People choice India, she received a nomination in December 2012, as Best Female Artist and South Asian Media gave her the Trailblazer Award.

Her second single was called "exotic" which featured Pitbull and American rapper. Her third single "I can’t make you Love Me" was released on April 2014. It peaked at the Billboard Hot Dance song chart at number 28. She also did a playback song for “Mary Kom.” It was entitled "Chaoro" and was her first playback. In 2015, she recorded a duet with Farhan Akhtar for the film “Dil Dhadakne Do” and a promotional song in 2016 for “Ventilator.”

Priyanka Chopra has a foundation called Priyanka Chopra Foundation for health and Education". She donates and supports many girls and women. She speaks out against infanticide and foeticide related to women.

Also, she supports education for girls. Since 2006, she has worked with UNICEF and has promoted girl child rights and education. Due to her interest in and commitment to The Child Rights, on August 10, 2010, she was nominated National UNICEF Goodwill Ambassador. She also launched the "Save the Girl Child” to change the Indian's attitude towards girls.

Priyanka Chopra voices a robotic elephant named "Ellie" belonging to People for the Ethical Treatment of Animals (PETA's) in 2015. This was an initiative meant to visit schools across the US and Europe aimed to educate children on the effects of elephants captivity and why people should boycott circuses. In December 2016, she was selected to be the global UNICEF Goodwill Ambassador.