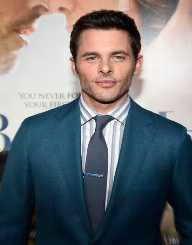 American actor and former Versace model James Marsden was born in Stillwater, Oklahoma on 18 September 1973. He has four siblings.

James Marsden went to Putnam City High School School, Oklahoma City and then enrolled at Oklahoma State University where he did media studies. He did not graduate, leaving instead to pursue a career in acting.

After arriving in LA, James Marsden secured a role on the pilot episode of Nanny (1993). Later, in 1994, he appeared in Boogies Diner. He had a role  Second Noah (1996), gaining some positive attention. Then in 1997, he was cast as Glenn Foy on the hit show Ally McBeal (1997). He also appeared with Katies Holmes in Disturbing Behaviour (1998). From that time onwards, he appeared different movie genres. He was considered perfect for romantic lead roles, but his breakthrough role was playing Cyclops in X-Men (2000) alongside actors like Hugh Jackman.

James Marsden started working in some film genres and because of his striking good looks, found a niche in romance roles. He appeared in The Notebook (2004),  Heights (2005), Superman Returns (2006), Lies & Alibis and Hairspray (2007). James Marsden also appeared in the X-Men sequels: X2 (2003) and The Last Stand (2006). Marsden played John F Kennedy in The Butler (2013)  with Minka Kelly starring as Jacqueline Kennedy. More recent work includes Accidental Love (2105) and Unfinished Business (2015). He also appeared in Anchorman 2: The Legend Continues (2013) and in Westworld (2016) a sci-fi film.

James Marsden is also a singer. He sang on the soundtrack of Hairspray.

James Marsden's breakthrough role was playing Cyclops in the X-Men series of films.

In 2008, the cast of Hairspray (2007) were collectively nominated for the Screen Actors Guild Award.

James Marsden was married to Lisa Linde (m.2000-d.2011). The couple has two children. Jack Holden and Mary James. As well as his son and daughter with Linde, Marsden has another son William Costa-Marsden, born December 2012. William's mother is Rose Costa, Marsden’s ex-partner.

James Marsden’s hobbies including photography and music. He plays sings, plays the piano and guitar.