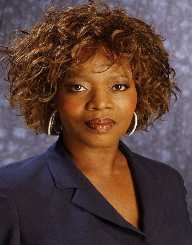 Alfre Woodard is an African American actress. Her work has spanned theater, film, and television.

Alfre Woodard was born on November 8, 1952, in Tulsa, Oklahoma. Her father Marion was an interior designer and her mother Constance was a homemaker. Woodard has two older siblings.

While at Bishop Kelley High School, Alfre Woodard was active in cheerleading and track. He was encouraged to audition for the school play where she discovered her interest in acting. She graduated in 1970. Woodard graduated from Boston University in 1974 with a Bachelor of Fine Arts degree in acting.

After college, Alfre Woodard started in theater on the East Coast but later moved to Los Angeles to continue acting. Her breakout role was in the Los Angeles stage production of “For Colored Girls Who Have Considered Suicide When the Rainbow is Enuf.” That led to her first major film Remember My Name in 1978.

In 1983, Woodard was gaining recognition for her acting in film and on television. She was nominated for an Oscar for Cross Creek as well as a Primetime Emmy Award for her role in Hill Street Blues. She had guest roles in a variety of TV series including the 1986 pilot for L.A. Law and recurring roles like in St. Elsewhere from 1985-1988. She also continued with her Broadway performances.

The 1990s was a time in which Alfre Woodard took on a variety of roles in the film. She was in Crooklyn in 1994 and was a lead in Star Trek:  First Contact in 1996. She even won her first Golden Globe award as the star in the TV movie Miss Evers' Boys in 1997.

In 2012, Alfre Woodard was part of the Lifetime Channel remake of the film Steel Magnolias. In more contemporary roles, Woodard has portrayed political figures such as President Constance Payton in the NBC series State of Affairs (2014-2015) and Mayor Mariah Dillard in the Netflix series Marvel's Luke Cage (2016-2018). She is also set to be the voice of Sarabi in the live-action remake of Disney's The Lion King scheduled for 2019.

Alfre Woodard is a political activist. One of her organizations is the Artists for a New South Africa which she founded for the advancement of democracy and equality. She was motivated to help the country after she played former South African First Lady Winnie Mandela in the 1987 TV movie Mandela. She is also working to end the AIDS epidemic in Africa.

Alfre Woodard was nominated for Best Actress in a Supporting Role in the 1983 film Cross Creek. She also won a Golden Globe Award for Best Performance by an Actress for her role in the 1997 TV movie Miss Evers' Boys.

Woodard has earned a total of four Primetime Emmy Awards and 12 nominations. Her first award was for Outstanding Supporting Actress in a Drama Series for Hill Street Blues.