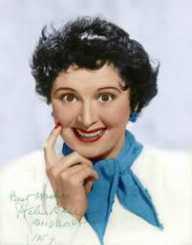 Helen Kane was born on August 4th, in 1904. She is best remembered for being a talented American singer. One of the songs that she is best recognized for is “I Wanna Be Loved By You.”

Helen Kane was born Helen Clare Schroeder on August 4th, in 1904. She was the youngest daughter to Louis and Ellen Schroeder. Her place of birth was in the Bronx, United States.

Growing up, Kane demonstrated her early acting skills as she performed in the theatre. Her mother offered her support by paying for her first costumes in school. By the time Kane clocked 15 years she had performed exceptionally well.

Helen Kane took to the stage on Broadway with her role in Stars of the Future. Around this period, she also honed her singing skills by being a member of a singing trio group which would later be called The Three X Sisters.

Helen Kane rose to the limelight in 1927. This occurred after she featured in A Night in Spain, a renowned musical during the late 1920s. The musical ran for about seven months with over 150 performances from Kane. Due to her remarkable performance, she earned herself an opportunity to perform at the Paramount Theater in New York.

Kane’s immense recognition and her unique style of singing motivated her into recording over 20 songs in 2 years. Between 1930 and 1951, she did some recording with Columbia Records.

Aside from making a name for herself as a singer, Helen Kane also featured in some films during the late 1920s. Her debut role came in 1929 after starring in Nothing But the Truth. During the same year, she featured in two other films namely Sweetie and Pointed Heels. In 1930, she featured in three films including Paramount on Parade, Dangerous Nan McGrew and an uncredited role on Heads UP!

Helen Kane wedded Joseph Kane in November 1924. However, this marriage was not successful as it came to an end by 1925. Kane finalized their divorce while she was in Mexico in late 1932.

The following year, she tied the knot with Max Hoffman Jr. This marriage also came to an end after Hoffman deserted her. In 1939, Kane wedded Dan Healy. The two lived together until Kane lost her life.

Helen Kane passed away on September 26th, in 1966. She had had breast cancer for over a decade. She died at the age of 62 years.