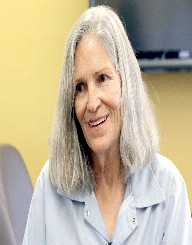 Leslie Van Houten was born on August 23, 1949, in Altadena, California, United States. She is a former member of the Manson Family who was convicted in America for the murders of Leno and Rosemary LaBianca. She committed the murders orchestrated by the Manson family in 1969 at the age of nineteen.

She was convicted and sentenced to death, but her sentence was reduced to life imprisonment after the 1972 ruling against the death sentence in a California Supreme Court. She was denied parole nineteen times and was granted second and third recommendations for paroles in 2016 and 2017 respectively which were also rejected.

Leslie Louise Van Houten was born on August 23, 1949, in Altadena, California, United States. At the age of fourteen, her parents divorced. At the age of fifteen, she began using drugs such as marijuana, hashish and LSD which became her regular habit. She also ran away from home for sometime before returning later to continue with her high school studies. She became pregnant at the age of seventeen and under the influence of her mother she was forced to abort the unborn child.

In 1968, while living at a commune in California Leslie Van Houten met Catherine Share and Bobby Beausoleil and decided to stay with them. After a disagreement erupted amongst them, the nineteen year old Leslie decided to follow Share who left for Charles Manson’s commune. The same she began living with Manson at the Spahn Ranch on the outskirts of Los Angeles County.

In 1969, the one person whom Share had referred to as godly and religious turned out to be fierce and intolerant. Mason became violent and wanted to start a revolution. Mason began engaging his followers in criminal acts including theft and house break-ins. Leslie was apprehended and sent to jail for a few days while Manson engaged in murders of several people including that of Sharon Tate in 1969.

However, Leslie Van Houten was not fully involved in committing the previous murders as she was still under initiation. On the night of August 9, 1969, she was in the company of Charles Watson also known as ‘Tex’ and Patricia Krenwinkel when they killed Leno and Rosemary LaBianca. She was responsible for stabbing LaBianca sixteen times out of the forty seven stabs that had been reported after the autopsy.

By the fall of 1969, the whole of Manson Family was in police custody including Leslie Van Houten, and after much trial, she was found guilty of murder in March 29, 1971. She was convicted and sentenced to death but later commuted after a California Court rescinded the death penalty and instead ruled for a life imprisonment sentence.

She later faced a new trial in 1977 and was again found guilty on counts of first degree murder. However, her second sentence had an inclusion for parole. After nineteen unsuccessful hearings in the court chambers and possible pleadings for parole, in April 2016 she was recommended for release by a parole board.

The decision to grant Leslie Van Houten parole was dismissed by California Governor Jerry Brown stating that she would be a threat to the society if released. In September 6, 2017, she appeared for the 21st time to plead for parole before the board. She was considered as deserving parole but her fate was still in the hands of the Governor of California Jerry Brown. In January 19, 2018, the Governor denied her parole for the second time but her legal team continued with their efforts to seek for parole the latest attempt being in June 29, 2018.

Leslie Van Houten is still incarcerated and hanging in the hopes of receiving parole. She is currently sixty nine years old.