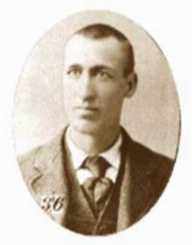 Casey Jones was a railroad engineer who became an American folklore legend owing to his heroics. Jones sacrificed his own life while trying to save hundreds of lives aboard his train which crashed into a stalled freight carriage near Mississippi.

The collision was severe, and it resulted in Jones’ death, but his efforts ensured no other lives were harmed. Jones’ friend Walter Saunders popularized the legend with his song "The Ballad of Casey Jones" which has been covered by innumerable artists like Johnny Cash, Pete Seeger, etc.

Jonathan Luther "Casey" Jones was born on March 14, 1864, in Missouri. His father was a school teacher. The family moved to Kentucky when Jones was in his adolescence. Since he lived near the tiny community of Cayce, Jones got the nickname ‘Cayce’ which gave way to ‘Casey’ eventually.

At a mere age of 15, Jones took up the position of a telegrapher at Mobile & Ohio Railroad. Jones loved the newly flourishing railroad system, and his work ethic soon saw him upgrading to a brakeman.

After a while, he promoted to a stoker. Jones joined the Illinois Central Railroad in 1888 and continued as a fireman for three more years. On February 23, 1891, Jones fulfilled his childhood dream when he was appointed as an engineer.

At the World's Columbian Exposition Fair of 1893, Jones was attracted to Illinois Central’s new shiny toy, no. 638. It was a technological marvel at its time, and Jones loved driving it. He became one of the best railroad engineers, and everyone knew about him.

Noted for his punctuality and diligence, Jones was believed to have always arrived at a station on scheduled time. He was also popular for his trademark whistling sound which was described by many as a war call for the Vikings or a ‘whippoorwill whistle’.

In 1886, Jones married Joanne "Janie" Brady, the daughter of the owner of the boarding house where he used to stay. They had two sons and a daughter. In 1939, Jones’ friend Fred J. Lee jotted down some interesting anecdotes in his book Casey Jones: Epic of the American Railroad. A 3-cent postage stamp was issued by the United States Postal Service in his honor. Jones was an ardent baseball fan and a teetotaler.

While there are many versions regarding the details of his death, what is known for sure is that Jones and his fireman Sam Webb were 75 minutes behind schedule when they departed from Memphis that tragic day.

But Jones, who was known for his speed and timeliness almost managed to get the train on schedule when they reached Durant. It was a rainy night with the fog playing havoc with the visibility, reducing it to a minimum level.

Webb was the first person to realize that there was another train in front of them as he saw the red lights of a caboose. Jones insisted Webb to jump off the train which the latter obliged and thus saved his life. But Jones didn’t leave his train and instead pulled on the brakes and whistled vehemently to warn everyone in the freight train that he was going to crash.

Casey Jones died instantly from the collision, but due to his valor, all the passengers lived to see another day. There were no other casualties. It is said that when his body was discovered from the wreck, he had one hand on the brakes and another on the whistle cord.