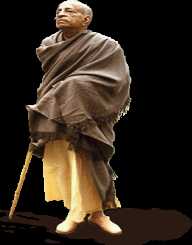 Gaudiya Vaishnavism spiritual teacher and founder of the International Society for Krishna Consciousness was born Abhay Charanaravinda Bhaktivedanta Swami Prabhupada on the 1 September 1896 in Kolkata, India.

In 1922, he met his spiritual master. Srila Bhaktisiddhanta Sarasvati Gosvami, was the founder of the Vedic Institutes and impressed with Srila Prabhupada invited him to join him in dedicating his life to spreading Vedic knowledge to the Western world. Srila Prabhupada spent eleven years as his student, and in 1933, he was recognized as Bhaktisiddhanta Sarasvati disciple.

In 1947 the Gaudiya Vaisnava Society honored Srila Prabhupada with the title Bhaktivedanta. At age 54, in 1950 Srila Prabhupada retired from married life. Four years later he adopted the vanaprastha. He moved to the holy city of Vrndavana and lived in the historic medieval temple of Radha-Damodara where he concentrated on studying and writing.

Then in 1959, he accepted the sannyasa. It around this time that he began his masterpiece: the Bhagavata Purana which runs to eighteen thousand verses. He also produced Easy Journey to Other Planets.

Srila Prabhupada went to America in 1965. Without resources, he established the International Society for Krishna Consciousness in 1966, and within ten years the organization grew to include schools, institutes, temples, and farming communities worldwide.

Another North American initiative was the founding of an experimental Vedic town in rural West Virginia in 1968. The success of this community inspired the growth of similar communities internationally. In 1972 he founded the Gurukula School in Texas.

An international center at Sridhama Mayapur, West Bengal was built, and there is the Krsna-Balarama Temple and International Guest House in Vrndavana.

Srila Prabhupada writings, published by the Bhaktivedanta Book Trust have been translated into many languages.

In the final years of his life, Srila Prabhupada continued with his work as he traveled internationally. He also continued writing.

A. C. Bhaktivedanta Swami Prabhupada died on the 14 November 1977 at the age of eighty-eight, in Vrindavan, Uttar Pradesh, India.