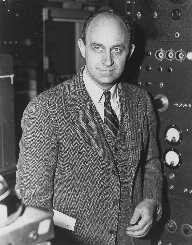 American nuclear physicist Val Logsdon Fitch was born on the 10 March 1923 in Merriman, Nebraska. He was raised on a cattle ranch and was the youngest of three children. His father Fred Fitch was a rancher and his mother Frances Logsdon, a trained school teacher. The family ranch was forty miles northwest of where the Battle of Wounded Knee had taken place, and because of his interest in their culture, Fitch Sr.spoke the local Indian language and was made an honorary chief.

Fitch’s father was injured in a riding accident which resulted in the family having to move to Gordon in Nebraska where Fitch Snr worked in the insurance industry.

Val Logsdon Fitch was educated at the local schools in Gordon, Nebraska graduating in 1940. He initially enrolled at Chadron State College in Nebraska where he spent two years before being drafted into the US Army when the United States entered World War II in 1943. After his military discharge in 1946, Val Logsdon Fitch enrolled at McGill University in Montreal to study electrical engineering. He then did graduate work at Columbia University and was awarded his doctorate in physics in 1954.

Val Logsdon Fitch was enlisted in 1943, and during World War II, Val Logsdon Fitch was sent to Los Alamos, New México to work on the Manhattan Project. He worked under Ernest Titterton and met some of the world renowned figures in physics. He spent three years in Los Alamos and learned the techniques of experimental physics and developed the timing devices that triggered the bomb. On the 16 July 1945, he witnessed the Trinity test.

In 1946 he was discharged from the U.S. Army and resumed his studies, obtaining a Ph.D. from Columbia in 1954.

Val Logsdon Fitch took up a position at Princeton University and spent twenty years studying K-mesons. This work resulted in the discovery of CP-violation.

Val Logsdon Fitch and his university colleague James Cronin proved in 1964 that the matter-antimatter symmetry is violated when the neutral K-meson decays. They also proved that symmetry does not apply during time reversal. Val Logsdon Fitch and Cronin jointly won the Nobel Prize in Physics in 1980 for these discoveries. Nobel laureate Samuel Ting of the Massachusetts Institute of Technology called their discovery, which shows that the laws of physics change with time, one of the most important discoveries in physics in the century.

Between 1970 and 1973 Val Logsdon Fitch was a member of President Richard Nixon’s Science Advisory Committee.

Fitch’s first wife was Elise Cunningham. The couple had two sons. After Cunningham died in 1972, Val Logsdon Fitch married Daisy Harper, and they remained married until his death.