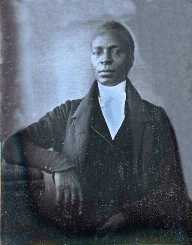 James Forten was born 2nd September 1766, to Thomas and Margaret Forten. He was born in Philadelphia, Pennsylvania, in the United States. His father died when he was young, which meant Forten started working at seven years of age. He worked to help support his mother and sister.

He worked as a chimney sweep and then became a clerk in a grocery store. At the same time, he studied at the African School. A local Quaker and abolitionist started the school to educate black children.

Forten left when he was nine to work full-time, even though his mother wanted him to stay in school.

At the age of 14, during the American Civil War, Forten served on the Royal Louis. During the War, the British captured the ship. Typically, under such conditions, Forten would have been made a slave. Fortunately, Forten impressed the Captain that took control, and he was chosen as a prisoner of war instead.

Forten and the other prisoners traveled to HMS Jersey, moored in Brooklyn. Conditions were very harsh, with over 11,000 people dying there during the war. The British treated the prisoners terribly, and many prisoners died of disease and from the bad conditions.

Seven months after his capture, the authorities released him on parole. He walked from Brooklyn to Philadelphia to be home with his mother and sister.

Forten then joined a merchant ship sailing for England. He spent the next year working in London at a shipyard.

In 1790, Forten returned to Philadelphia. He became an apprentice sail-maker, and his employer soon promoted him to foreman.

When his employer, Robert Bridges, retired in 1798, Forten purchased the business. He modernized the handling of the sails, and he soon had a hugely successful sail loft.

Forten employed both blacks and whites, and he became one of the wealthiest businessmen in Philadelphia.

Forten spent a lot of time and money supporting civil rights for blacks. He also worked to end slavery.

The government in Pennsylvania considered changing the laws to disadvantage blacks. Due to this, Forten wrote a leaflet putting across the opposite point of view. As a result, the laws failed to pass, and Forten became famous for the booklet he had written.

In December 1816, the American Colonization Society (ACS) was started. The aim of the ACS was to assist with resettling blacks to other countries such as Haiti and Liberia.

Forten initially supported the ACS due to ongoing discrimination against blacks in the U.S. He later changed his mind when he realized how the blacks felt about moving overseas.

Along with several other civic leaders, Forten organized a meeting in January 1817. He wanted to hear from the local black community. Over 3,000 people attended, and they all voted against colonization.

Most of the people had been in the U.S. for many generations, and they saw it as their home. From that moment on, Forten decided to put all his efforts into ending discrimination against blacks in America.

In 1831, he supported William Lloyd Garrison in starting a newspaper called The Liberator. The newspaper regularly spoke out against colonization, and Forten often contributed articles to the publication.

He continued to manage his sail loft business late into his life. He also remained an active civil rights leader for the rest of his life.

Forten married Martha Beatty in 1803, but Beatty died several months after they married.

In 1806, he married Charlotte Vandine. They had nine children, and two of Forten's sons succeeded him in the sail loft business.

To the credit of Forten, his children grew up committed to the civil rights movement.