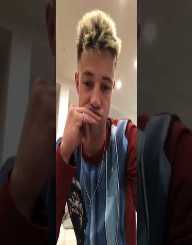 Born on September 8, 1994, Cameron  Dallas is an actor, singer, model and one of the rising social media stars. Cameron  Dallas made a film debut in 2014 playing the role of Felix O’Neil in the film Expelled. He has since appeared in others like The Outfield, and television roles in AwesomenessTV, American Odyssey, and the Netflix reality show Chasing Cameron.

Cameron  Dallas social media prominence cannot be overemphasized, as he has a strong reputation on Vine and YouTube, Twitter and Instagram. He has taken advantage of social and is currently one of the leading Viners with 8.1 followers on that platform. Cameron  Dallas is also famous on Twitter with8.6 followers and Instagram with 15 million followers.

Cameron Dallas was born on September 8, 1994, in Los Angeles, California to mother Gina Dallas. He of a Scottish, Mexican and German descendant. He as an elder sister Sierra Dallas and was raised in Chino, California by his mother.

Cameron  Dallas success in social media all started in September 2012 when he created a Vine account and made his first posting. His initial postings were of himself playing jokes and subsequently videos of him playing a prank on his friends and family. Since that time, he has become a vine phenomenon and in just two years had over 8.1 million vine followers. This made him the 11th most followed Viner. He is not only on vine but also on Twitter with more than 8.6 followers and also with 15 million followers on Instagram.

Cameron  Dallas is always in touch with followers presenting them with top provoking videos, which can sometimes get your ribs off. Cameron  Dallas generated lots of controversy and social media fume at the 2016 Teen Choice Awards. It all started when he was asked during the ‘Would You Rather’ at the TCA backstage, whether he would rather use Jessica Alba or Justine Timberlake’s toothbrush. Dallas answered he would choose that of Justin Timberlake because he doesn’t know where Jessica has been. The answer didn’t go down well with people who took to social media express their displeasure calling him a sexist. Dallas tried to defend himself terming the act as a joke, but people could not just let the issue die out.

Cameron Dallas has played roles in films and television productions since his debut in Expelled as Felix O’Neil in December 2014. The CEO of AwesomenessTV, Brain Robbins had previously announced April that year that Cameron  Dallas would be starring in the movie. In 2015, he lent his voice in The Frog Kingdom and later that year appeared NBC thriller television series American Odyssey.

He also featured in The Outfield alongside Nash Grier and Caroline Sunshine that same year. He is a cast for Netflix reality series Chasing Cameron as himself in 2016. Dallas released the single She Bad in 2015, which charted number 46 in the Hot R&B/Hip-Hop. He was also featured in Daniel Skye’s song All I Want.

Cameron  Dallas has ventured into other businesses including partnering with the likes of Hayes and Nash Grier to launch the clothing line Aeropostale. He has also worked with Kelvin Klein as a showstopper during a Milan Fashion Week.