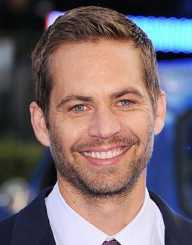 Paul William Walker was born in Glendale, CA on September 12, 1973.  The oldest child of Cheryl (Crabtree) Walker and Paul Walker III. Paul would eventually have four younger siblings, brothers Caleb and Cody, and sisters Ashlie and Amie.  Paul’s mother was a model and started Paul in the modeling industry by the time he was two years old. His first starring role was in a Pampers commercial. He started to land roles in a variety of television shows in 1985. Shows such as Who’s the Boss, Touched by an Angel, and Highway to Heaven. His first movie role came just a year later for the film Monster in the Closet. Over the next several years Paul was in a number of television shows and movies. This included The Young and the Restless for which Paul and his co-star Heather Tom were nominated for Outstanding Lead Actor and Actress in a soap opera at the Youth in Film Awards.

Paul had a close knit and supportive family. He was raised as a member of the Church of Jesus Christ of the Latter-Day Saints, though later in life he converted to non-denominational Christianity. In 1998, Paul and his then girlfriend, Rebecca Sotero, welcomed their daughter, Meadow Rain Walker. Eventually, the relationship with Sotero ended and Meadow lived with her Mother in Hawaii until 2011 when she chose to live with her Father. Paul was, by all accounts, an excellent and loving Father.

In 2010, Paul was able to fulfill a personal mission by forming the non-profit organization Reach Out World Wide (ROWW). This organization brings aid to areas that have been devastated by natural disasters. They have aided affected regions around the world. Paul’s family has maintained the organization since 2013.

Paul Walker has been in the public eye since he was two years old. As mentioned earlier, his early childhood saw him in many commercials, televisions programs, and an occasional movie. His popularity and heartthrob status grew when he was cast in Pleasantville in 1998 and then in Varsity Blues in 1999. His movie career took off after that, and he worked steadily films of a variety of genre. In 2001 he landed the lead role in The Fast and the Furious. He played Brian O’Conner opposite Vin Diesel as Dominic Torreto. The two men went on to form a deeply loving friendship, calling themselves brothers.

The Fast and the Furious cemented Paul’s place in movie history as an excellent action star and leading man. The first movie grossed more than $200 million worldwide and paved the way for future installments in the franchise.

In 2011 Paul was announced to be the new face of the Coty Prestige Fragrance brand Davidoff Cool Water for Men.  His Modeling career was not completely behind him.

Paul graduated from Village Christian School in 1991 and went on to community college. He would attend several community colleges while pursuing his interest in Marine Biology. Eventually, Paul decided that acting was his true passion, though he carried a love for and connection with the ocean his entire life. In 2010 he was able to combine his two loves when he participated in a series for the National Geographic Channel. Paul was part of a crew on an eleven day expedition to find and tag great white sharks off the coast of Mexico. During that time the crew tagged seven great whites. The information the scientific community was able to collect for the next five years from those tagged animals was instrumental in expanding our understanding of the lives of great whites, particularly the migratory and mating patterns. The series aired in June of 2010 under the name Shark Men.

On November 30, 2013, Paul took part in a toy drive fundraiser for his charitable organization (ROWW). His Daughter Meadow was there in support of her Father, as well as a number of Paul’s friends. One of those friends, Roger Rodas, took Paul for a ride in his Porsche Carrera GT.  The two men crashed into a light pole and two trees a short time later when the vehicle attempted a curve at almost twice the posted speed limit. The coroner report states that Paul died of his wounds almost immediately.  Just eighteen days after his fortieth birthday, Paul Walker passed away.  There were many celebrity tributes in the days and weeks following his death. Vin Diesel became the Godfather of Paul’s daughter Meadow.

Paul had recently wrapped shooting for several films and was still filming The Fast and the Furious 7 at the time of his death.  In all, four films he starred in were released posthumously. As his shots in the Fast and the Furious 7 were not completed his two brothers stood in as body doubles, and CGI was used to superimpose Paul’s face over theirs. The end of the film features a tribute to Paul.