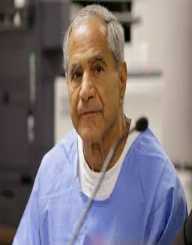 Sirhan Bishara Sirhan was born on March 19, 1944. He is a Palestinian who shot Senator Robert F. Kennedy on June 5, 1968, fatally wounding him. He holds Jordanian citizenship. The shot led to the death of Robert the next day. He was convicted of murder and is currently serving his sentence at the Richard J. Donovan Correctional Facility in San Diego in California. He is presently seventy four years old.

Sirhan Bishara Sirhan was born on March 19, 1944, in Jerusalem in Mandatory Palestine. He was raised in the West Bank where he experienced a lot of violence during the Arab Israeli Conflict. The occurrences of the conflict left him traumatized all through his childhood. His elder brother was killed during the conflict. At the age of twelve, he and his family emigrated to the United States of America and settled in California.

He attended Eliot Junior High School. After graduating high school, he joined Pasadena City College, Pasadena. Sirhan later moved to Corona to become a jockey. He then lost his job since he got an injury to the head. In 1966, he became a member of the occult organization ‘Ancient Mystical Order of the Rose Cross,’ that is, Rosicrucians.


The Assassination of Robert F. Kennedy

On June 5, 1968, Sirhan Sirhan shot Senator Robert Kennedy with a .22 caliber Iver Johnson Cadet revolver at the Ambassador Hotel in Los Angles after he had finished addressing his supporters in the main ballroom of the hotel. Sirhan shot Kennedy two times in the back and once in the head. He died twenty-six hours later after the shooting happened.

The other people who were shot at the hotel included Paul Schrade, William Weasel, Ira Goldstein, Elizabeth Evans, and Irwin Stroll but they all recovered. In 2018, Robert’s son claimed that Sirhan did not kill his father but that a second gunman was involved during an interview with ‘The Washington Post.’

Sirhan Bishara Sirhan pleaded guilty to murdering Robert, but the same was followed by a lengthy trial. On April 17, 1969, he was convicted and sentenced later to death in the gas chamber. In 1972, his sentence was changed to life in prison which was influenced by the decision in the case of The People of the State of California Versus Robert Page Anderson where it was held that capital punishment was a violation of the California Constitution’s prohibition of cruel and unusual punishment.

In 1971, he was held at the Adjustment Centre at San Quentin State Prison. He was later transferred to the Correctional Training Facility in Soledad in California where he stayed until 1992. In 1992, he was held at the California State Prison until 2009. In 2009, for security reasons, he was transferred to the Pleasant Valley State Prison in California where he stayed in his cell. In 2013, he was moved to Corcoran to the Richard J. Donovan Correctional Facility in San Diego County, California. He is set for a parole hearing in 2021. He is currently seventy four years old.